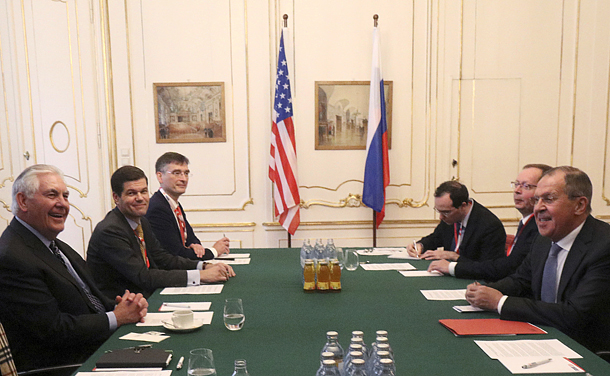 Lavrov told reporters after the talks on the sidelines of an annual Organization for Security and Cooperation in Europe (OSCE) ministerial council meeting that he conveyed to Tillerson that Russia is ready to play a role in direct talks between the United States and North Korea.

“We know that North Korea wants above all to talk to the United States about guarantees for its security,” Lavrov was quoted as saying by Russia’s Interfax news agency. “We are ready to support that, we are ready to take part in facilitating such negotiations.”

He added that such a message was conveyed to Tillerson and other U.S. officials.

On Nov. 29, after over two months of no provocations by the regime, Pyongyang launched a Hwasong-15 intercontinental ballistic missile (ICBM) into the East Sea, which analysts said had the capacity to reach all of the U.S. mainland.

The Russian Foreign Ministry said in a statement that Lavrov underscored that U.S. military exercises on the Korean Peninsula and Washington’s aggressive rhetoric were causing an “escalation of tension” in the region and “is unacceptable.”

Russia again suggested that the United States and South Korea cease conducting joint military exercises in return for North Korea halting its nuclear and missile tests to lead to negotiations with Pyongyang.

This is in line with a Chinese and Russian joint initiative declared in July calling for such a double suspension policy, or double freeze, to de-escalate tensions on the Korean Peninsula. Washington has routinely rejected the notion of a “freeze-for-freeze” agreement.

Igor Morgulov, vice foreign minister of Russia, was quoted as saying Tuesday by Russian state media that Moscow discussed such a freeze-for-freeze agreement with Pyongyang officials and that North Korea “showed interest” in such a deal.

Morgulov was also critical of the large-scale combined aerial exercise between the U.S. and South Korean military, dubbed Vigilant Ace, held over the past week, which he said “complicates the situation on the Korean Peninsula and in no way can be seen as an invitation to dialogue,” according to Tass news agency Wednesday.

But remarking on Lavrov’s statement on North Korea, the U.S. State Department maintained that Washington will not conduct direct talks with Pyongyang.

“As a general matter the issue of direct talks with North Korea is not on the table until they are willing to denuclearize,” said Heather Nauert, spokeswoman of the U.S. State Department, in a briefing in Washington Thursday. “It is something that Russia has said it agrees with. It is something that China has said it agrees with and many other nations around the world as well.”

She continued that North Korea “is not showing any interest in sitting down and having any kind of serious conversations when they continue to fire off ballistic missiles. Period.”

Jeffrey Feltman, the UN undersecretary general for political affairs, wrapped up a four-day visit to Pyongyang which kicked off Tuesday, during which he met with North Korean Foreign Minister Ri Yong-ho and other officials.

North Korean state media reported Thursday that Ri held talks with Feltman and that the UN delegation visited Mansudae Assembly Hall. Feltman is a former U.S. diplomat and was the first senior official from the United Nations to visit the reclusive regime in six years.