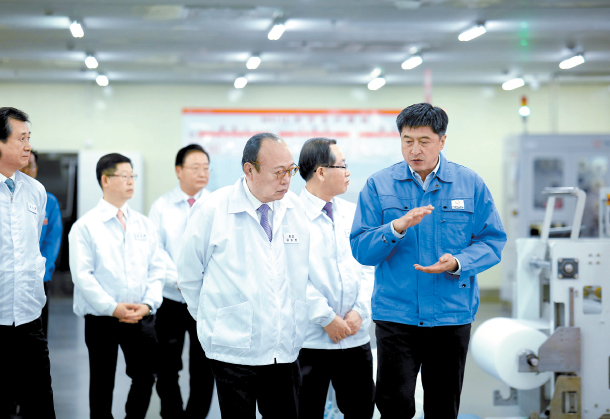 Kim Seung-youn, chairman of Hanwha Group, visited a solar cell factory in Qidong, China, on Monday prior to a trade delegation accompanying President Moon Jae-in on his diplomatic trip to Beijing.

During Kim’s visit to the factory run by Hanwha Q Cells, the chairman stressed the need to more aggressively “foster Hanwha’s leading solar business in the world” and called for the factory to “secure top product quality in global markets with self-developed technologies.”

It was Kim’s first visit to the Qidong factory after Hanwha acquired the plant in August 2010 to strengthen its solar energy business. At the time, Hanwha was in the early stages of entering the market.

Monday’s visit was also Kim’s first since he last visited an overseas Hanwha production site in 2014, when he inspected a construction site for an urban development in Iraq.

At the time, he made headlines by delivering sashimi to 600 local workers after they expressed how much they craved it.

Kim’s visit is seen as a sign that Hanwha hopes to beef up its solar energy business and count on overseas markets for future growth.

The error rate in producing modules, a group of integrated cells, has improved by 60 percent, according to the company. The improvement came after Hanwha acquired the German solar energy company Q Cells in 2012.

In 2013, Chairman Kim placed his oldest son, Kim Dong-kwan, in charge of strategic marketing for the company. The son accompanied his father on the tour Monday.