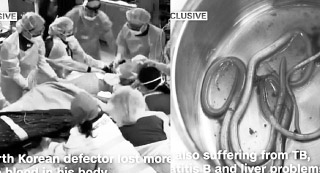 During an emergency surgery for a critically wounded North Korean defector last month, doctors found a number of parasites in his intestines. [CNN]

The North Korean soldier who escaped through the Joint Security Area in Panmunjom on Nov. 13 amid gunfire survived his wounds after extensive surgery. Dr. Lee Cook-jong later reported finding many parasites in the soldier’s body, some measuring up to 27 centimeters (11 inches). After learning the news, many people who had little interest in parasites suddenly became aware of them, and sales of antiparasitics soared.

News of the parasites saddened me because my mother was a physician for 40 years and I worked as a hospital pharmacist for 12 years in North Korea. Parasite eradication was a routine health care project in the North, repeated during the spring and autumn. When I was young, I used to accompany my mother on these trips.

I cannot forget one campaign at an 18-story hotel in Pyongyang. In the early 1970s, I was curious why my mother called the hotel guests together and ordered them to take drugs. I wondered what they were taking. That question was answered when I became a pharmacist.
During the parasite treatment period, each community unit and accommodation in each district — including hotels, inns, universities and workers’ dormitories — must go through a hygiene campaign. “Prevent parasites in advance,” they would say. “Wash vegetables clean.”

Soup would be served as light dinner, and people would get up early the next morning with an empty stomach and assemble at a health clinic for parasite treatment. A health care provider in charge of three to four community units of about 150 people would arrive at 5 a.m., check for any missing households or individuals, and make sure everyone took their drugs.

Children aged 1 to 14 were given pills, and adults took liquid medicine. The liquid medicine had no sweeteners and tasted very bitter. Repeated twice yearly from March to April and September to October, the parasite treatment program was one of the major projects for health care professionals.

In the 1990s, as pharmaceutical plants suffered from a critical shortage of water, electricity and energy supply, North Korea could not produce enough antiparasitics. Instead of medicine, dried mugwort was provided. Health care professionals went to their designated districts and infused the mugwort. The work was not easy, and due to lack of supply, even the dried mugwort was not provided for three years.

Then, in the summer of 1998, UN medical inspectors arrived with good medicine. It was like finding an oasis in the desert. Among the provided drugs, mebendazole was very effective. Only hospital staff and their families received the drug.

An internal source recently told me that the regular and periodic parasite eradication programs of the 1970s and ’80s have nearly disappeared. Parasites prevail in North Korea not just because of certain individuals or a specific time period. It is an outcome of the Arduous March. Chronically poor pest control led to dozens of parasites infecting the North Korean soldier’s body.

Since 1994, North Korea has become a vast habitat for infectious diseases. People are suffering from various illnesses, including cholera, hepatitis and tuberculosis. In particular, the prevalence of hepatitis and tuberculosis in North Korea is 6.7 times worse than in the South, according to World Health Organization data from 2010. About 30,000 defectors with health risks have entered South Korea, but research on them and preventative measures are still lacking.

Japan has prepared countermeasures in case of an inflow of North Korean refugees. But since it has been 20 years since mass defections started, South Koreans might have become insensitive to the health risks. A foundation helping defectors settle in the South does not even have a study on the health conditions and contagious diseases of North Koreans.

Researchers studying North Korea and its defectors tried to address starvation in the North in the 1990s without understanding that contagious diseases were the cause. Military and political security are meaningless without health security. It is our calling to seek quality of life improvements for North Koreans.

*The author, a North Korean defector and pharmacist, is president of the New Life Foundation.