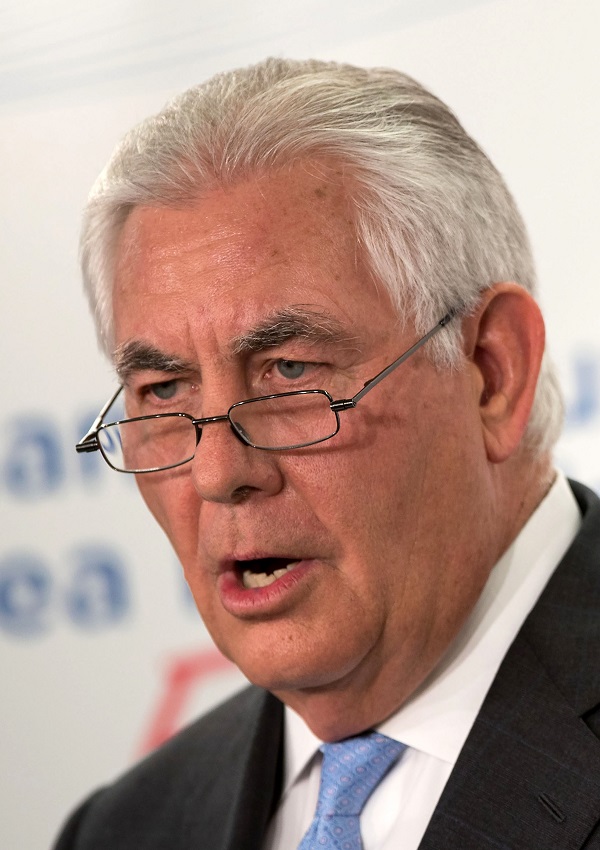 U.S. Secretary of State Rex Tillerson offered North Korea direct talks without preconditions while speaking at a think tank in Washington Tuesday, a renewed diplomatic overture to the isolated regime.

“We’ve said from the diplomatic side, we’re ready to talk anytime North Korea would like to talk,” Tillerson told a forum hosted by the Seoul-based Korea Foundation and the Atlantic Council in Washington. “And we’re ready to have the first meeting without preconditions. Let’s just meet.”

Tillerson’s offer of talks without preconditions is a new diplomatic gesture after North Korea tested its most powerful intercontinental ballistic missile (ICBM), the Hwasong-15, on Nov. 29.

He continued: “It’s not realistic to say we’re only going to talk if you come to the table ready to give up your [nuclear weapons] program.” North Korea, he said, has “too much invested in it.”

He said the discussion can be on “whether it’s going to be a square table or a round table,” or even about the weather.
“But can we at least sit down and see each other face to face,” Tillerson continued. “And then we can begin to lay out a map, a road map of what we might be willing to work towards.”

U.S. President Donald Trump “is very realistic about that as well,” he said, indicating that the president is on the same page.
It is a very large shift in language from Trump’s “fire and fury” statements, and his bellicose threat at the UN General Assembly in September to “totally destroy” the regime. Tillerson has consistently favored a diplomatic solution in the Trump administration, even when the president undercut his efforts. In October, Trump tweeted that the state secretary was “wasting his time trying to negotiate with Little Rocket Man,” his belittling nickname for North Korean leader Kim Jong-un.

Tillerson told the panel that the first step to negotiations for him is to get to know his counterpart and that “getting to an agreement means a willingness to talk about a lot of things.

“The important thing is that we get started,” said Tillerson. “If there was any condition at all to this, is that look, it’s going to be tough to talk if in the middle of our talks, you decide to test another device.”

He added, outlining in more concrete language than before, that Washington continues to indicate to North Korea that for talks, there needs to be a “period of quiet” without provocations by Pyongyang, and that “you need to tell us you want to talk.”

The North halted provocations for over two months, which led to some anticipation that there could be some sort of breakthrough toward dialogue, before it conducted its most recent ICBM launch.

“They clearly understand that if we’re going to talk, we have to have a period of quiet,” Tillerson pointed out. “Or it’s going to be very difficult to have productive discussions.

“The door is open,” said Tillerson. “We’ll show up when you tell us you’re ready to talk.”
He also reiterated in his keynote address to the forum — titled “Reimagining the U.S.-Korea Partnership in the Trans-Pacific Century” — that the “era of strategic patience,” a policy of the Barack Obama administration, has ended and an “era of strategic accountability” had begun.

Tillerson said Washington’s approach is to impose “ever-greater penalties” and pressure on the regime to persuade it to halt development of nuclear weapons development and systems to deliver them.
“I will continue our diplomatic efforts until the first bomb drops,” he said.

Tillerson added that he is confident that “we’re going to be successful.” Diplomatic efforts are encouraged by President Trump, he said, but he also underscored that the U.S. military is ready with a full range of contingencies.

The softening in Washington’s tone with the North comes after diplomacy by a Chinese senior diplomat, Song Tao, President Xi Jinping’s special envoy, who went to Pyongyang last month, and a rare high-ranking United Nation official’s trip to the country last week.

Washington also has been rolling out unilateral sanctions on the North, some targeting Chinese banks and entities, in addition to calling on Beijing to exert more pressure. Tillerson pointed out that Trump “would like to see China cut the oil off,” which he indicated would help get the North back to the negotiating table.

“Time will tell what was the impact of our discussions,” Jeffrey Feltman, the UN undersecretary general for political affairs, told reporters at the United Nations Tuesday after giving the Security Council a closed-door briefing on his visit to Pyongyang last week. “But I think we have left the door ajar, and I fervently hope that the door to a negotiated solution will now be opened wide.”

Feltman said he conveyed that Pyongyang should signal if it would consider engagement including “talks about talks” and that the United Nations is ready to act as a facilitator for talks.

He also called on the North to open channels of communication, including military hotlines, to avoid misunderstandings, adding that North Korean Foreign Minister Ri Yong-ho would likely brief the regime’s leader Kim Jong-un on the discussions that took place.

North Korean officials also agreed it was important to prevent war on the Korean Peninsula, Feltman said, saying dialogue in total spanned some 15 hours, though Pyongyang didn’t commit to anything.

Feltman described his four-day visit as the “most important mission I have ever undertaken.”
South Korea’s presidential spokesman Park Soo-hyun noted that Tillerson’s remarks underscored Washington’s position, calling upon North Korea to halt its provocations and threats and return to dialogue.

“South Korea and the United States have left the door to dialogue open, which is something we have closely cooperated on in many ways,” Park said in a statement Wednesday.