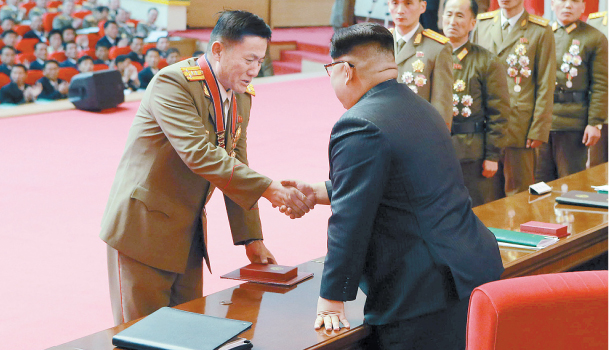 North Korean leader Kim Jong-un, right, thanks military officials for their development of the Hwasong-15 intercontinental ballistic missile, which was test-flown on Nov. 29, during the 8th Conference of Munitions Industry Tuesday in Pyongyang. [YONHAP]

Kim Jong-un declared that his country completed its nuclear weapons program during a munitions conference in Pyongyang, the first time the regime has ever announced the feat by directly quoting its leader.

While presiding over the 8th Conference of Munitions Industry Tuesday, which kicked off the day before, Kim was quoted by the Korean Central News Agency (KCNA) as saying that the North “successfully carried out the great historic cause of completing the state nuclear force,” a remark made before key aides, scientists, technicians and officials in the defense and munitions industry.

Previous rounds of the munitions conference were never publicized.

“The Juche-based national defense industry will continue to develop and we will win victory in the showdown with the imperialists and the U.S.,” Kim added, according to an English version of the KCNA report published Wednesday.

North Korea proclaimed its mastery of nuclear weapons development on Nov. 29 through the KCNA, shortly after it test-fired the Hwasong-15 intercontinental ballistic missile (ICBM), but the words were delivered in the form of an official government statement.

At the time, the Hwasong-15 was identified as the regime’s “most powerful” ICBM, one that could be tipped with a “super-large heavy warhead” capable of striking all parts of the U.S. mainland.

At the munitions conference, Kim reportedly encouraged the country’s scientists and munitions workers to “bolster up the nuclear force in quality and quantity, manufacture more advanced weapons and equipment of Korean style,” thus “fully displaying the dignity and might of the socialist military power and hastening the final victory of the Juche revolution.”

Officially, the South Korean government refuses to believe North Korea has mastered its missile and nuclear development program, saying it’s highly uncertain that it has cleared the last-remaining hurdles of precision guidance and atmospheric re-entry.

Seoul doesn’t even call North Korea’s missiles ICBMs in public statements, instead referring them to as “long-range missiles,” no matter how far they fly. The admission would undermine its efforts to pursue dialogue with the regime.

But behind the scenes, South Korean government officials said Kim’s message was a sign that Pyongyang would try to kick off the New Year using its nuclear weapons as a bargaining chip. A broad idea of North Korea’s next set of goals will likely be presented in Kim’s annual New Year’s address on Jan. 1.

“Despite harsh sanctions from international society,” a local government official said, “Kim Jong-un carried out a nuclear experiment and test-launched a missile suspected to be able to reach the U.S. mainland. He’s trying to break away from the defensive by going his own way and not caring about anything else.”

Ko Yu-hwan, a professor of North Korean studies at Dongguk University in Seoul, predicted the North will try to negotiate a formal peace treaty with the United States next year using its “strategic standing,” which would replace the armistice to put a final end to the 1950-1953 Korean War.

“Kim Jong-un has been acting against pundits’ predictions ever since he was elevated to power” in 2011, said Kim Young-soo, a political science professor at Sogang University in Seoul. “He’s bragging to the world that he’s selecting his own dates, regardless of the circumstances or some political event.”