The 2018 LPGA Tour will have a record $68.75 million in prize money across 34 tournaments in 14 countries, according to the schedule announced by the LPGA Tour on Wednesday. 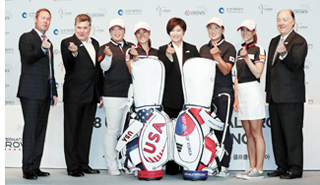 The addition of two tournaments brings the number of LPGA Tour events with Korean companies as main sponsors to seven. A majority of them are scheduled for the months of March and April. Two will take place in May and October, though one of them, the LPGA Volvik Championship, could be played under a different sponsor as the Korean golf ball company is seeking to give up its naming rights.

The Hugel-JTBC Championship is the first of two events to make their debut on the LPGA Tour, starting on April 19 in Los Angeles. Then, four days later, the LPGA Tour will make a stop in San Francisco to play another newly-added tournament sponsored by the Korean brand L&P Cosmetics, though an official name for the event has not yet been decided.

The number of tournaments with Korean companies as main sponsors is a record in the LPGA Tour’s history. The tour’s relationship with Korea Inc. began in 2002 with the CJ Nine Bridges Classic. As Korean golfers began to dominate the tour, more Korean companies stepped up to sponsor the women’s tournaments.

The addition of the two Korean-sponsored tournaments next year is expected to excite local golf fans. In particular, October will be a busy for the country. Korea is hosting the UL International Crown, a biennial team match tournament on the LPGA Tour where eight countries compete in teams of four. This is the first time the event is being played outside the United States.

In 2017, there were initially 35 tournaments scheduled, but the Reignwood Classic was canceled three weeks before it was to take place in Beijing.

McKayson Golf, the main sponsor of the tournament, is a Korean golf wear brand.

“Perhaps the most important aspect of our schedule is the consistency - continuing to deliver strong playing opportunities both in North America and around the world, while growing overall purse levels every year,” LPGA Commissioner Mike Whan was quoted as saying on LPGA website. “There is simply no better tour opportunity in the world when it comes to purses, global TV coverage or strength of field.”

The 10-month LPGA season will start with the Pure Silk-Bahamas LPGA Classic at Paradise Island on Jan. 25.