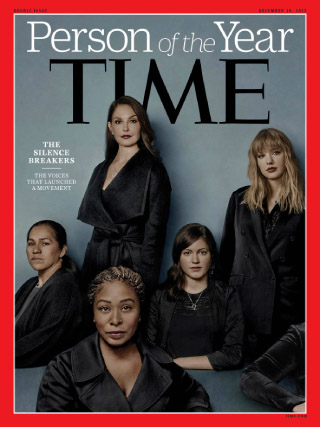 What was the most controversial news in the United States and Europe this year? It was not Donald Trump or North Korea’s nuclear tests. The most talked-about news was sexual harassment based on power imbalance. U.K.-based newspaper the Financial Times selected Susan Fowler as the FT Person of the Year on December 13. In February, the former Uber engineer exposed in a blog the poisonous corporate culture in the company and described the sexual harassment in the workplace.

Time Magazine also selected the women who exposed sexual harassment as the Person of the Year 2017. The #MeToo movement followed. The cover of the Time issue featured five women who participated in the campaign, including Fowler, actress Ashley Judd and singer Taylor Swift with the title “The Silence Breakers.”

Sexual harassment in the workplace is nothing new. But it is a new phenomenon that the issue, which was hushed and not openly addressed in the past, is discussed in prime-time news and major media. The Me Too campaign began as allegations of sexual assault by Hollywood producer Harvey Weinstein were made in October. Survivors exposed the crimes they had suffered. Over 40 celebrated names, including filmmakers, journalists, reporters, comedians, professors and politicians dishonorably stepped down from their positions.

Their swift apologies and departures were interesting, and the campaign is positively changing awareness in Western society. Now, it is not just about whether sexual crimes actually happened or not, but also the affect they have on society and the economy. Companies that are associated with sexual harassment and assault or have failed to deal with allegations properly feel their competitiveness is tainted. Talented female workers may leave for competitors and the company’s value may plummet. Also, there are discussions that assault survivors leaving work or moving to another company could result in social loss as their careers shift and the income gap between genders grows.

The end-of-the-year party season has come, and people tend to drink more. Both male and female workers are nervous. For sexual harassment prevention education to be effective, about four hours of one-on-one training customized for specific fields and jobs is necessary. It may be a challenge to implement the program right away due to time and costs. What we can put into immediate use is reinforcing the role of the bystander. For example, a bystander can step in and say, “That joke wasn’t funny,” or “Didn’t he cross the line?” to alert people present. If an assaulter is harassing something, a bystander can drop something or talk to them to intervene. We need to help each other.