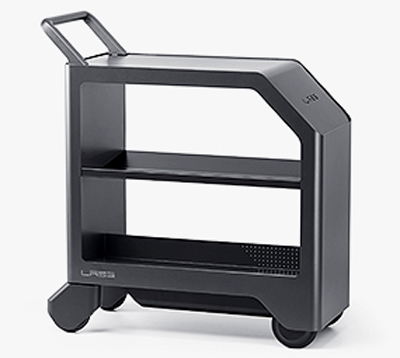 Naver’s Aircart can be controlled by sensors and automatically brake when going downhill. [NAVER]

Naver Labs, the research and development subsidiary of the internet giant Naver, plans to make its patented technology for a robotic office cart available for free in the first half of next year.

The company said Thursday that it would allow developers to access the user guide, circuit diagram and source code for Aircart, an office cart developed by the company that can be controlled by touch sensors and brake automatically while going downhill.

The release is meant to “let more people resolve issues incurring from everyday life using robotic technologies,” said Seok Sang-ok, the group leader of robotics at Naver Labs. “We hope to see various types of Aircarts that have been optimized for different situations like logistics centers, hospitals, libraries and airports.”

Seok said the company was open to receiving requests for business cooperation.

Before releasing the technologies to the public, Naver Labs is taking pre-emptive measures to ensure open-source activity matches up to standards the company expects from its own products.

“We will discuss with related industries to set detailed policies, given it is necessary to tactically cope with the potential of other manufacturers making below-standard products, neglecting user safety and abusing technologies,” a Naver spokesman said.

Aircart is one of nine robots that the company showcased at Deview, its annual developer conference, in October.

The robot resembles a book cart used in libraries and has touch sensors on its handles. Users can control the motions of Aircart by applying or removing force on the touch sensors. The cart can move uphill and automatically brake when going downhill.

Aircart is currently being used at a Yes24 bookstore in Busan, along with Around, an autopilot robot equipped with 360-degree cameras and three-dimensional razor scanners so it can map its environment and detect obstacles. Around was also developed by Naver and used in the store to transport books.

Naver, operator of Korea’s top search engine, has been stepping up efforts to reach the technological level of Google through its “ambient intelligence initiative,” in which the company hopes to provide predictive technology that can understand and interpret people’s motivations and circumstances.

At Deview in October, Seok said he believes robots are the “technologies of the present that can be applied to livelihood now, not ones that will be used in the far future.”

In line with these ambitions, Naver spun off Naver Labs at the beginning of this year and acquired Xerox Research Center Europe, known for its strength in artificial intelligence research, in June.