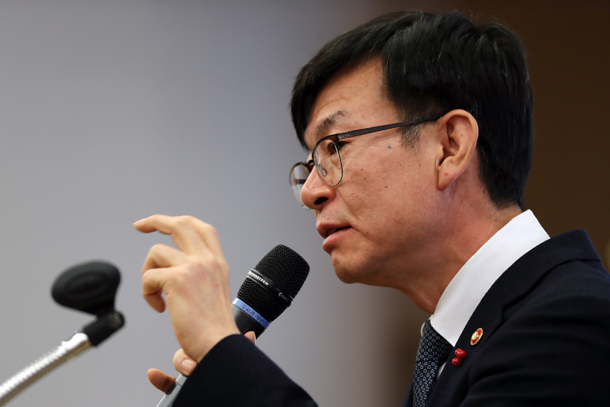 Kim Sang-jo, chairman of the Fair Trade Commission, talks about the Moon administration’s policies on economic competition at the National Assembly on Friday. [YONHAP]

The chairman of Korea’s Fair Trade Commission vowed to end conglomerates’ exploitation of small and medium-sized businesses in a policy speech on Friday, reiterating his long-held position that the fruits of economic growth should be evenly distributed across the economy.

At a National Assembly forum hosted by the governing Democratic Party and attended by small-business owners, Kim Sang-jo blamed the country’s widening income inequality on “unfair distribution of wealth” between conglomerates and contractors, arguing that big companies have exploited their market dominance to reap gains from smaller partners.

“The Fair Trade Commission will pour its utmost effort into terminating unfair business practices between conglomerates and smaller companies,” said Kim, a former economics professor and activist who was appointed to lead the FTC in June. “As part of such efforts, we will lay out measures to improve terms for contractors.”

Specifically, Kim said the government would strengthen monitoring of infractions such as major retailers forcing partner stores to return bulk supply or big companies requesting extra work from their contractors.

Kim’s remarks echoed comments made the previous day during a meeting with reporters in which he said putting an end to exploitation by conglomerates was key to economic democratization, a slogan that refers to fair distribution of wealth among large companies, small businesses and workers.

To improve governance at the family-run conglomerates known as chaebol - which are infamous for their byzantine cross-shareholding arrangements that strengthen the owner family’s control of the company - Kim said he had called on executives to voluntarily reform.

“When I met with top-level executives at conglomerates, they all knew the issues at stake and what is required to resolve them,” he told reporters Thursday. “What matters is their willingness to execute their plans. I am demanding they execute their plans quickly.”

Kim said changing times demand different policies as the economy of the 1960s, when the fruit of a few conglomerates was dispersed across the economy, is no longer here.

“The trickle-down theory is not working anymore,” Kim said, “and that is the reason why the Korean economy is facing low growth and wealth polarization.”

He added the trickle-down theory has stopped working because Korea does not a have level playing field for all businesses.

Kim built his pre-FTC career as a sharp critic of the country’s powerful chaebol, earning him the nickname “chaebol sniper.”

President Moon Jae-in’s appointment of Kim to FTC chairman in June represents the president’s intent to follow through on a campaign promise to end exploitation of small businesses by large conglomerates.