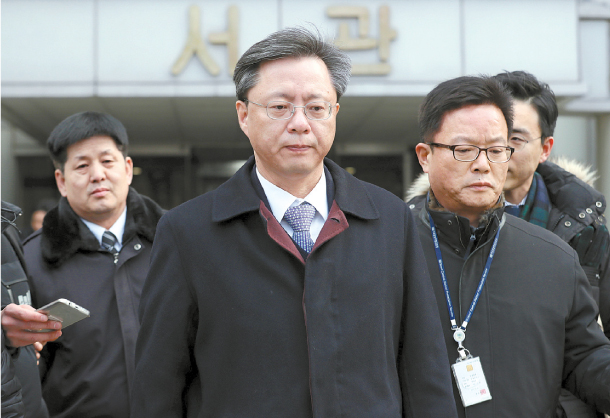 Woo Byung-woo, former presidential senior secretary for civil affairs in the Park Geun-hye administration, was arrested Friday for alleged involvement in a clandestine surveillance of public officials and other high-profile figures by the National Intelligence Service. [YONHAP]

Woo Byung-woo, former Blue House senior secretary for civil affairs in the Park Geun-hye administration, was arrested Friday for alleged involvement in the clandestine surveillance of public officials and other high-profile figures by the National Intelligence Service.

Woo’s arrest marks a particular victory for prosecutors investigating the former president and her closest aides given how hard-won it was. Woo has been grilled on a wide range of allegations over the past 18 months but never arrested.

Ever since the Choi Soon-sil scandal erupted last October, Woo, himself a former prosecutor, was questioned on six different occasions. Prosecutors filed for arrest warrants twice, but judges rejected the requests due to a lack of evidence.

The Seoul Central District Court ruled differently on the prosecution’s third attempt, saying it feared the 50-year-old might try to destroy evidence. It said there was ample evidence to believe the surveillance allegation was true. Woo is being detained at the Seoul Detention Center in Uiwang, Gyeonggi, where he’ll be questioned by prosecutors for an abuse of power charge.

Better known as mikkuraji (loach) in Korea, a term for someone hard to catch, Woo shot into the spotlight last year for disobeying summonses by a bipartisan special legislative committee that held a series of public hearings to grill key suspects in the so-called Choi-gate scandal that brought down the Park government (named for the president’s confidante and partner in crime Choi Soon-sil).

Lawmakers went as far as to offer a 15 million won ($13,800) bounty for details on Woo’s whereabouts. When Woo finally gave in and appeared at the National Assembly, lawmakers criticized what they called “arrogant behavior,” as Woo slouched in his seat, adamantly denied every single accusation against him and repeatedly said he had nothing to do with the scandal.

In their latest attempt to detain Woo, prosecutors said they zeroed in on the allegation that Woo tried to defend his and his family’s interests from coming under attack by Lee Seok-su, an independent inspector-general who was tapped by President Park in March 2015. Lee was tasked to improve administrative transparency and reduce corruption by monitoring and investigating possible irregularities by the president’s family and senior government officials.

Woo became Lee’s first target in July 2016. Lee accused Woo’s son of receiving favorable treatment while serving as a conscript in the police during his mandatory military service, and accused Woo of using his wife’s company to understate his and his family assets when making his public servant’s asset disclosure.

The probe didn’t last long. In August, the Blue House accused Lee of leaking details of the Woo investigation, triggering Lee to resign from the post later that month.