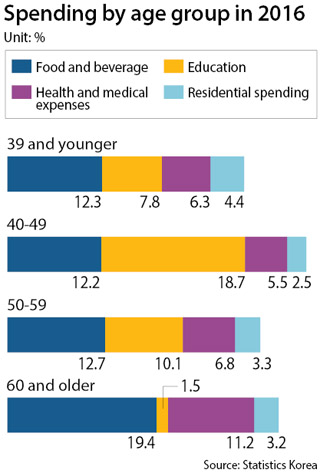 Although people in their 50s have the largest incomes in Korea, when it comes to spending it’s those in their 40s that top the lists.

But the biggest concern is rising poverty among older people. Korea has seen its population of senior citizens expand at an alarming rate.

The study noted that spending on medical bills among those aged 60 years and older has increased significantly. The medical bills of the older generation made up about 11.2 percent of their spending, almost double that of other age brackets.

The income of older people was far less steady than other groups. In other age groups, those that made money through employment was over 70 percent.

Among those aged 60 and older, only 46.5 percent had a steady income through employment. In fact, 28.3 percent lived on non-labor-related income, including transfer payments such as pensions.

Despite the tough economic situation, the number of parents relying on their children has been shrinking. Those that rely on their children accounted for 47.4 percent as of last year, a drop from 52.9 percent in 2008. On the contrary, the amount of parents that have been trying to pay their living expenses on their own has risen from 46.6 percent to 52.6 percent.

However, the poverty situation turned out to be critical.

Particularly the poverty rate of those aged 76 and older was ranked No. 1 among OECD member countries at 60.2 percent.

Those in their 30s and 40s were the most abusive, accounting for more than 70 percent of abuse cases.