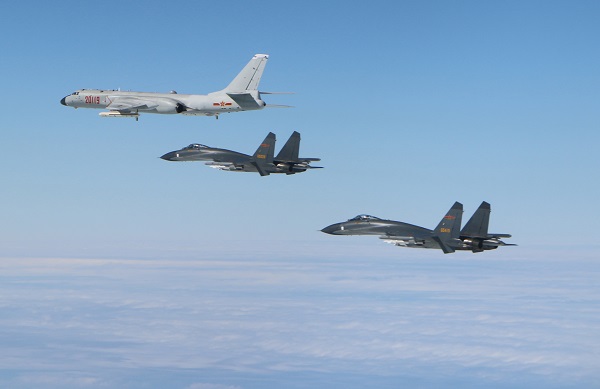 The Korean Joint Chiefs of Staff (JCS) announced that at around 10:10 a.m. Monday, five Chinese military planes were detected entering the KADIZ from southwest of Ieodo, an underwater reef effectively controlled by Korea that belong in waters that both Seoul and Beijing claim.

The JCS added that the Chinese warplanes flew within Japan’s air defense identification zone before entering the KADIZ, and departed from the region at around 1:47 p.m. west of Ieodo, back toward China.

The Chinese aircraft were said to have included two H-6 bombers, two J-11 fighter jets and a Tu-154 reconnaissance plane.

As the Chinese military aircraft approached the KADIZ around 10:02 a.m., the Korean Air Force dispatched F-15K and KF-16 fighters in an emergency sortie.

The JCS said that the Korean fighters identified the Chinese military aircraft and continued surveillance until they left the KADIZ.

Korean authorities are in the process of finding out the intention of the Chinese military.

Chinese warplanes previously entered the KADIZ off the southern coast of Jeju, near Ieodo, on Jan. 9, which prompted Korea to scramble 10 fighters in response until they left.