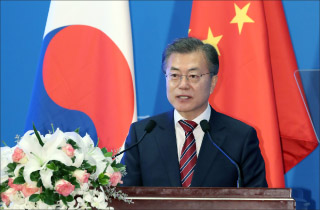 President Moon Jae-in makes a speech at Peking University on Dec. 15, the third day of his state visit to China. [YONHAP]

According to Article 66 of the South Korean Constitution, the president is the chief executive of the state and represents the nation with foreign countries. The preface and Article 4 define South Korea as a nation based on a foundation of free democracy. President Moon Jae-in paid a state visit to China as the chief executive and representative of Korea. He has a duty to uphold its free and democratic identity, or the ideology and historical value of South Korea, with whomever he meets. It is the constitutional obligation of the Korean president.

Moon forgot his constitutional role during his latest visit to Beijing. His address at Peking University on Dec. 15 was full of language so overly modest it bordered on sycophancy and even self-defeat. Some comments raised questions if they really came from the president’s mouth as they were actually injurious to the country’s constitutional values. “South Korea is a small country but will join China’s dreams as a responsible mid-sized nation,” he said.

First of all, why South Korea has any role in China’s ambitions is incomprehensible. Moreover, it was degrading for the president to describe his own nation as a “small country.” These comments followed a kind of paean to Chinese President Xi Jinping. “I saw President Xi’s colossal dreams of China,” he said. “To engage others with law and virtues is what makes China a big nation.”

The smallness of the country he mentioned appeared not refer to the size of its land or population. In the context given, he was suggesting that South Korea is smaller than China in national dreams, values and leadership. But South Korea is much bigger than China in terms of gross domestic product per capita, economic competence, scientific and technological levels, lifestyles of individuals, spiritual, cultural, and religious freedom, diversity, human rights and justice, separation of powers, not to mention democratic freedoms of expression and conscience.

The Chinese may have felt complacent about the South Korean president vowing to aid China in its pursuit of aspirations. No leader in South Korea’s 70 years has pushed his own country down so low or played up to another country quite so desperately. This is no feudal society. How dare a president of a free democratic republic demean this nation — especially in comparison to a communist state — and hurt the pride of 50 million free South Koreans?

Moon’s ambassador to China, Noh Young-min, already caused a controversy when he submitted his letter of credentials to Xi. He quoted what King Seonjo of the Joseon dynasty wrote to the emperor of Ming Dynasty in China over four centuries ago. It was an expression of gratitude and worship.

In his address at Peking University, Moon told the students of the elite Chinese institution that there were many memorials and sanctuaries in Korea paying respect to Chinese heroes. “In Gwangju, there is a road named after Korean composer Jung Yul-sung, who wrote the Chinese military song,” he said. Did the writer of Moon’s speech not even know that Jung wrote the military march for the North Korean Army? In fact, Jung was among the Chinese troops that invaded South Korea in 1959. He was respected by North Korean founder Kim Il Sung and composed many propaganda songs for the North Korean regime.

Jung did fight the Japanese colonialists as a socialist activist. But he cannot be pardoned for joining North Koreans in their invasion of South Korea to communize the rest of Korea. Moon was so busy flattering China that he completely forgot that the Chinese were brutal invaders of Korea. Instead, he praised a comrade-in-arms of Kim Il Sung, who attempted to quench the democracy of South Korea. Who will take the responsibility for bringing such huge shame on national dignity and impairing our national identity?