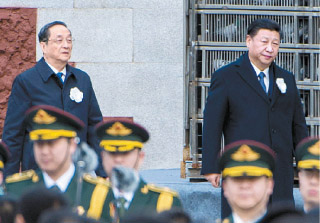 Korea University professor emeritus and expert in China studies Suh Jin-young said, “It would be ignorant to schedule President Moon Jae-in’s visit to China without knowing about the 80th anniversary of the Nanjing Massacre. If the schedule was made knowingly, it means breaking relations with the United States and Japan and going into China’s arms.” I cannot but agree with him.

It was in late November that I first heard that Chinese President Xi Jinping was to attend the 80th anniversary memorial ceremony of the massacre on Dec. 13. I was having a meal with a diplomat in Beijing from a third country unrelated to the Nanjing Massacre. At the time, I thought it could overlap with Moon’s visit. A source at the Korean Embassy said that the five-day visit was being arranged in mid-November for his state visit.

I felt something went wrong, as Moon’s arrival in Beijing for the visit was on the national mourning day, when Xi was not in town. It is like making a state visit on Memorial Day. I thought the schedule would be rearranged, but the visit was made from Dec. 13 to 16.

I learned that Moon’s arrival in Beijing was decided by Korea, so that the president would arrive a day before a summit meeting with Xi on Dec. 14. Until then, it seemed that the Korean Embassy in China, the Foreign Ministry and the Blue House overlooked the fact that Dec. 13 was the anniversary of the Nanjing Massacre and Xi wouldn’t be in Beijing because he was attending the event. The issue was raised after all details were set and it was too late to change.

Moon sent his Korean ambassador to China, Noh Young-min, to the Nanjing Massacre memorial ceremony. Moon also made remarks to commemorate the victims. Some say Moon’s remarks were too much, as Xi kept quiet. But Moon could have adroitly reacted to the situation, as China later showed gratitude for Moon’s remarks.

What I really want to ask is why Korea failed to notice that Dec. 13 was the Nanjing Massacre anniversary. It does not take great intelligence to predict that Xi would attend the event. Why did Korea miss something that a diplomat from even a third country knew?

There are a few regrettable parts to Moon’s China visit. The tour of Liulichang antique street was not highlighted, as it became too touristy. If he had instead visited Zhangjiakou, outside Beijing, where the Winter Olympics will be held in four years, it would have garnered more attention. While the Blue House is bent on promoting the PyeongChang Winter Games, it did not consider Zhangjiakou. This wasted opportunity is the result of a hasty visit that was not planned in advance thoroughly.