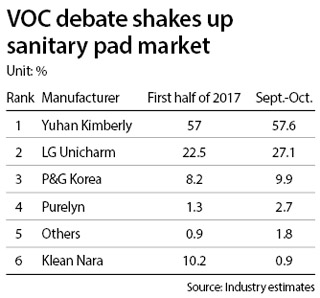 Since then, there have been notable changes in the market for women’s menstrual goods.

The most visible change in figures is the market rank for sanitary pads. Among the top 5 local manufacturers, Klean Nara was most heavily hit. Its 10 percent market share during this year’s first half plummeted to 0.9 percent between September and October.

Before the controversy, Klean Nara was ranked third in the 400-billion-won market, following leader Yuhan Kimberly and LG Unicharm. The top two remain unchanged despite the VOC scare.

Klean Nara’s sanitary pad Lilian topped the list in terms of VOC emissions according to test results from the women’s advocacy group. This stoked consumer fury, combined with accumulated reviews from users that reported aggravated cramps and a change in menstrual patterns after using the brand.

Currently the company is in the process of refunding Lilian products, which will take place until the end of this year. A lawsuit to compensate 5,300 consumers worth 15.9 billion won is also underway.

However, the legal dispute seems far from reaching a conclusion, with the company citing investigation results from the Ministry of Food and Drug Safety released late September that said that emissions of the 10 most harmful VOCs from top local sanitary pads, including Lilian, did not reach a level that can definitively be called harmful to the human body.

Despite official results from the government, consumers don’t seem to be relieved. Some experts say there needs to be more research to understand the long-term effect of VOCs on the human body and to define whether VOCs, among all other chemical substances in sanitary pads, can be the cause of menstrual pattern changes and aggravated cramps.

A survey conducted by the drug ministry in May showed that 80.9 percent of Korean women used disposable sanitary pads. Tampon and menstrual cup users account for a much smaller share of the market, at 10.7 percent and 1.4 percent. This consumption pattern partly explains why the market itself has not collapsed in terms of sales, with players other than Klean Nara stably maintaining their market share.

“I don’t fully believe the ministry’s announcement that domestic sanitary pads are harmless to the human body,” said a 26-year-old office worker surnamed Kim. “But I continue to use local sanitary pads because I don’t have many options. My plan is to shift to menstrual cups in the near future.”

As Kim mentioned, one positive affect of the public debate was that it increased awareness on the safety of women’s menstrual goods. Female consumers’ search for options other than pads sped up the government verification of menstrual cups, eventually permitting them to be mass-distributed this month for the first time in Korean history.