The LG Twins could use a good outfielder or two. 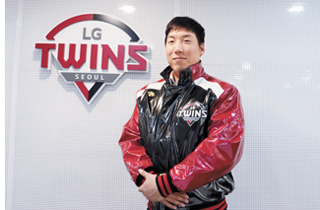 Kim Hyun-soo wears his new Twins gear after signing with the team on Tuesday. [LG TWINS]

Of the 10 Korean clubs in the 2017 season, the Twins had the lowest wins above replacement (WAR) rate at 3.04, while the team’s ERA was ranked first at 4.30. Based on their WAR, it’s no wonder the Twins are on the lookout for a top-notch outfielder in the free agent market.

After failing to sign Son Ah-seop of the Lotte Giants, the Twins put all their effort into getting Kim Hyun-soo, the 29-year-old outfielder with two seasons of experience in Major League Baseball.

On Tuesday, the Twins finally struck a deal with Kim, signing a four-year contract worth 11.5 billion won ($10.6 million), making him the second-highest paid player in the Korea Baseball Organization next season.


The contract represents the Twins’ focus on boosting its outfield positions. When Yang Sang-moon was appointed general manager in 2014, he vowed to create a new team and gave more opportunities to younger, faster players. In rookie drafts, he looked for outfielders that could take care of the Twins’ outfield for the next 10 years.

His plan, though, did not bear much fruit, and in the 2017 season, there was not a single outfielder who stood out.

Lee Hyung-jong seemed to have the highest potential, batting 0.360 in the first month of the season. Throughout the year, he played in the most games, at 128, but as the season wore on, he fell into a slump and concluded with a 0.265 batting average, nine home runs and 44 RBIs.

After Lee, Chae Eun-seong, An Ik-hun and Lee Chung-woong played in more than half of the Twins’ games, but now that Kim is joining the team, one of them will have to step aside.

“Now I have a rough image of our outfield,” said Ryu Joong-il, one of the Twins’ managers. “I see An Ik-hun as a center fielder and Kim Hyun-soo as a left fielder. Now we only need to choose a right fielder through a competition within the club. I expect to have a strong team of outfielders next season.”

Kim had a 0.273 batting average with seven home runs and 36 RBIs in Major League Baseball. Despite the limited number of games Kim played during his first season with the Baltimore Orioles, he still managed to have a batting average of 0.302.

But his second season was a struggle with a batting average of 0.231, and the Orioles transferred him to the Philadelphia Phillies in the middle of the season.

Although Kim hoped to continue his career in the MLB, he ended up returning to Korea. During a news conference Thursday, he said the main reason was to play in more games.

“I believed I could do well before I left for the United States,” Kim said, “but I couldn’t play up to expectations. I learned that there are some things that can’t be achieved through hard work.”

Kim, who made his KBO debut in 2007, played only for the Doosan Bears before he left for America in 2015. The outfielder said his big contract has put greater pressure on him.

“It makes me think again if I’m eligible enough of a player to receive this big money,” Kim said. “I feel like I need to play as well as I’ve done in the KBO for the Twins.”