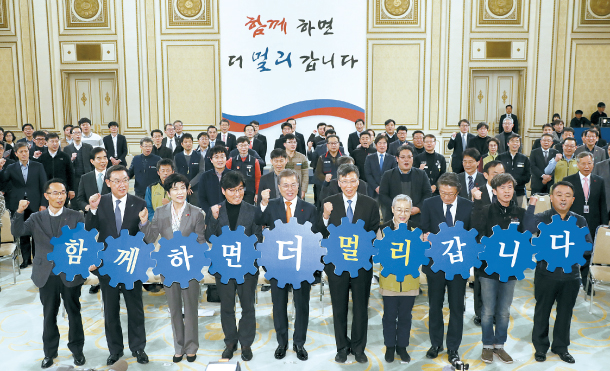 President Moon Jae-in, center, with labor union officials and company executives at the Blue House on Thursday. The sign reads, “Together, we go further.” [YONHAP]

President Moon Jae-in called for a compromise between labor unions and company executives to resolve issues facing the country’s workers, including long hours and low job stability for contract workers, during a meeting with labor and management representatives on Thursday.

The meeting at the Blue House included 120 union leaders and executives that the presidential office deemed as role models in labor relations.

The president emphasized the importance of compromise from each side to solve myriad labor-related problems and promised that his government would do its best to fulfill its mission of improving relations between company and worker.

Among the invited groups were the Health and Medical Workers’ Union and Korea Federation of Banks, an industry group that represents the country’s largest banks.

“The labor union for medical workers and its management struck an agreement to turn 11,000 contract workers in the industry into permanent ones,” the president said, citing the deal reached in October as a good example of labor-management relations.

Moon’s remarks come as his administration is rolling out a series of labor policies aimed at creating jobs, reducing the number of contract workers, particularly in the public sector, and raising the minimum wage.

Earlier this year, he followed through on a campaign promise to raise the minimum wage. Next year, the hourly rate will go up by 16.4 percent, the biggest jump since 2001, to 7,530 won.

On reducing the number of contract workers, the government pledged in October to put more than 200,000 public workers into permanent positions by 2020.

The transition would affect close to 65 percent of the public sector’s contract workers.

The government is also pushing to reduce the maximum number of work hours in a week to 52 from the current 68.

While the labor community has welcomed Moon’s policies, the business community has been less charitable, warning of excessive costs from government pressure to fully hire contract workers and raise their wages.

Despite the concerns, the president reaffirmed his commitment to improving labor conditions on Thursday.

He called raising the minimum wage, reducing work hours, improving conditions for contract workers and creating a cooperative relationship between labor and management as “objectives” to be achieved.