Another soldier defects at DMZ

Another soldier defects at DMZ 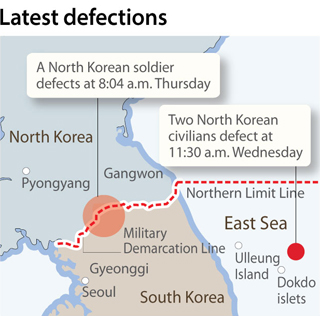 A low-ranking North Korean soldier defected to the South Thursday morning through the Demilitarized Zone (DMZ), prompting gunfire from both sides as the North’s border guards approached the Military Demarcation Line (MDL) in pursuit of the fugitive, said South Korea’s Joint Chiefs of Staff (JCS).

No damage or injuries were reported in the South.

The soldier made his way into the South at 8:04 a.m. South Korean soldiers fired some 20 rounds of warning shots at 9:24 a.m. when North Korean guards were seen approaching the MDL.

None of the North Korean border guards crossed the MDL and no bullet marks were found on the South’s side of the DMZ either.

Last month, bullets made contact in the South and one soldier briefly crossed the MDL when a North Korean soldier dashed across the MDL at the Joint Security Area in the truce village of Panmunjom.

Pyongyang has made no official statement on either defection.

According to the JCS, the North Korean soldier who defected Thursday was equipped with an AK-type rifle and made his way through the mid-western part of the frontline in Yeoncheon County, Gyeonggi.

A South Korean security guard saw him approaching the South and informed the military.

It wasn’t until about an hour and a half that a team of North Korean border guards were seen approaching the MDL, at which point the South Korean Army broadcast a warning and fired 20 warning shots.

The South Korean military said it was investigating the North Korean soldier’s motive for escaping.

In a separate case, two North Korean civilians were discovered by the South Korean Navy in a small wooden boat 100 kilometers (62 miles) northeast of the Dokdo islets Wednesday morning. A South Korean P-3C Orion patrol plane detected the boat at 11:30 a.m. and marine police approached them at 3:04 p.m. The duo, whose identities have been withheld, told South Korean authorities they wished to defect, according to the Unification Ministry, which handles inter-Korean affairs.

A total of 15 North Koreans directly defected to the South this year without traveling through a third country, four of whom were soldiers. Five North Koreans did so in 2016, including one soldier.

The latest defection of a North Korean soldier came only five weeks after the case on Nov. 13 made international headlines because the North broke the truce twice by firing weapons across the MDL and when one of its soldiers temporarily crossed the line while pursuing the defector. The dramatic scene was caught on United Nations Command’s CCTV and revealed to local media.

Some 40 rounds were shot at the soldier, 22-year-old O Chang-song, by the North Korean guards, wounding him in five areas in the shoulder, abdomen and elbow. O is currently being treated at the Korean Armed Forces Capital Hospital in Seongnam, Gyeonggi.