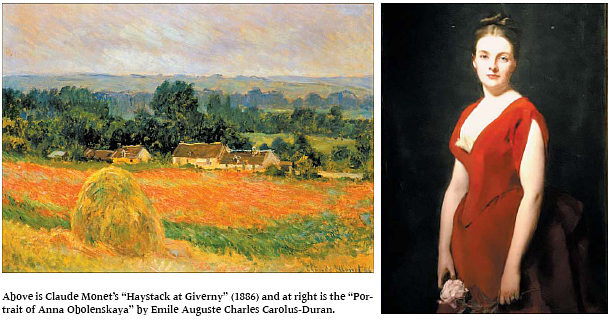 Ekaterina II (1729-96), also known as Catherine the Great, was an empress of Russia who reigned from 1762 to 1796 and is the country’s longest-ruling female leader. It is said that she was absorbed in French philosophy and its culture, especially the arts. In fact, she built a building known as the “Hermitage” in St. Petersburg, which now holds the largest collection of French art outside of France.

In an exhibit titled “From Classicism to Impressionism: Three Centuries of the French Art,” the National Museum of Korea in central Seoul is presenting a vast collection from the Hermitage Museum, in which about 40 percent of the works are part of Ekaterina II personal collection. Among them are some 89 paintings, sculptures and drawings by renowned French artists including Nicolas Poussin, Jean-Auguste-Dominique Ingres, Claude Monet, and Henri Rousseau.

Displayed in the third section are Ingres’s “Portrait of Count Nikolai Guriev” (1821) and Paul Delaroche’s “Christian Martyre Drowned in the Tiber” (1853), as the section focuses on French art in the age of revolution and Romanticism. The final section, titled “Impressionism and Beyond,” looks into innovative painters from the late 19th century onwards, who broke away from the classical art style.

The exhibition, which kicked off on Dec. 19 will run until April 15 at the Special Exhibition Gallery 1 & 2 of the National Museum of Korea in Yongsan District, central Seoul. Tickets cost 6,000 won ($5.52) for adults. Go to Ichon Station, line No. 4, exit 2. For more information, visit www.museum.go.kr/site/eng.