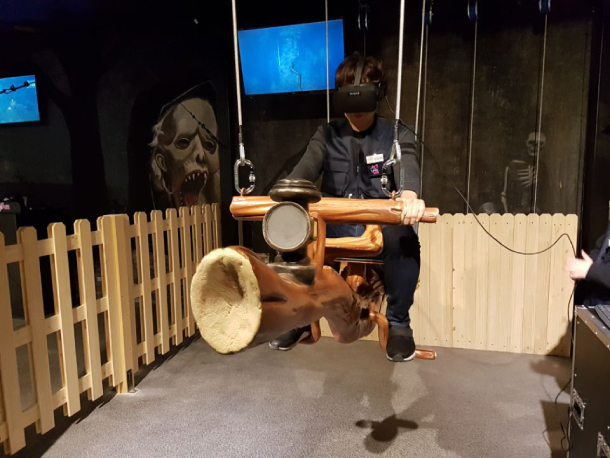 With the days getting shorter and the weather getting colder, people are increasingly seeking recreation indoors, and those looking for alternatives to outdoor workouts may find it in virtual reality (VR) arcades.

Fanta VR, the largest such arcade in Korea, recently opened on the seventh floor of the Hello apM in Dongdaemun, central Seoul, and comes with more than 30 virtual reality experiences spread across seven zones.

The zones - Fantasy Adventure, Extreme Games, Extreme Rides, Family Sports, Horror, Arcade and Promotion - are categorized based on visitors’ tastes. For VR novices, the arcade staff recommends starting with the more relaxing, almost meditative experiences before moving on to the more difficult and scary games.

Sports aficionados will enjoy virtual table tennis and baseball using actual paddles and bats. Along with the realistic sound of balls bouncing off the table and hitting the bat, players can also hear the sound of crowds cheering as if they were in an actual stadium.

Lovers of extreme sports can try virtual bungee jumping, rafting and hang gliding, but they are not for the faint of heart. The rides simulate situations that people might not encounter - or want to encounter - in real life, such as a raft ride down a waterfall that ends inside a crocodile’s mouth. The boat’s constant shaking adds to the tension.

In the Extreme Ride zone, a ride called “Ultimate Booster” simulates a roller coaster. While it starts off normally in the beginning, the ride comes to a tragic end when the roller coaster suddenly derails and crashes into the ground. The screen then goes black.

In the Horror zone, restricted to those over 18, visitors can try escaping from a zombie village or a witch ride that simulates flying on a broomstick. The broom’s up and down motion gives the actual feeling of flight.

Rides last an average of three to five minutes. For those going with friends and family, there are games where they can compete against each other in teams. While most rides are meant for one or two people, some can handle up to four.

In the “Small Worlds” ride, for instance, four people can share the experience of getting shrunk down to the size of an ant and seeing the world through the eyes of an insect.