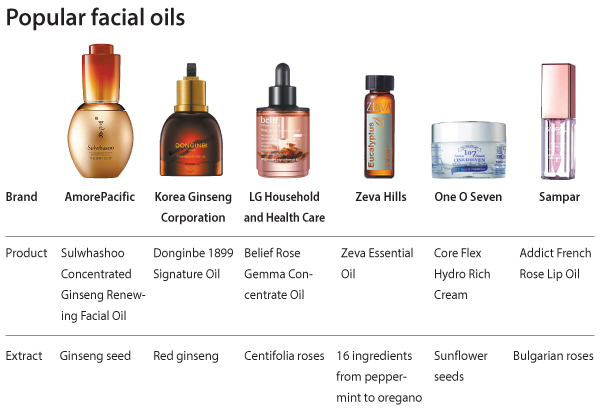 Kim Da-seul, a 22-year-old office worker, found her skin getting drier each day as the unseasonably cold December wore on, but her usual routine of applying three different moisturizing creams to her face was getting cumbersome. It often took 10 minutes each night for her skin to absorb all of it.

So she decided to switch to facial oil made with 100 percent herbal extracts. It was pricey - 60,000 won ($56) for a 10-milliliter (0.3-ounce) bottle - but she didn’t mind because it significantly simplified her routine. These days, she only uses one cream mixed with a few drops of the oil.

“Applying multiple cream products moisturized my skin but left it feeling oily,” she said. “But the new method of adding oil makes my skin feel moist through the end of the day without the oily feeling. It might seem expensive for to its size, but I think it’s actually more economical this way because I don’t have to buy as many products.”

The dry winter is boosting consumer demand for oil-based beauty products, especially among people who find lotion and cream - the most popular moisturizers - insufficient against the strong winter winds.

Among many oil-based products, facial oil has by far been the most popular. For those with dry skin, the product helps seal the hydration from lotion and cream, creating an effect similar to a protection wall that prevents skin from drying faster.

The base ingredients for facial oils are getting more diverse. Frequently used ingredients have included herbs like rosemary and chamomile, but recently, companies have also been using extracts not found in the market before, like red ginseng, bee glue and olive extracts.

What has fueled this development is the Korean perception that ingredients good for eating are also good for the skin. Apart from the moisturizing function that can be expected from facial oil, the ingredients used give customers the impression, rightly or wrongly, that they might also have additional health benefits.

For example, Korea Ginseng Corporation’s Donginbe 1899 Signature Oil released in October is made from red ginseng extract and is marketed as being able to improve the elasticity of skin. Better known for its health supplements, the Korea Ginseng Corporation said the facial oil was based on the company’s accumulated knowledge of the main ingredient. A root of red ginseng, the company said, can produce a single drop of oil extract.

Imports are selling well, too. Zeva Essential Oil from the United States purports to have zero artificial ingredients and only extracts from natural ingredients. There are 16 variations from peppermint and lemon to rosemary and oregano.