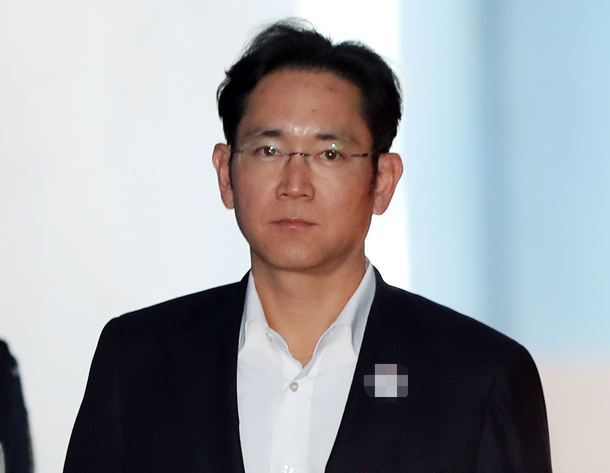 Lee has been in police custody since his arrest in February. A judge in August sentenced him to five years in prison, a reduction from the special counsel’s request for 12.

“This trial is to raise alarm over chaebol’s unlawful inheritance of management control and judge the dark transactions as bribery,” Park said during the appeals trial at the Seoul High Court.

“The case would be the archetype of a collusive alliance between politics and businesses.”

He called the trial a “first step in the settlement of a healthy market economy and democracy” and said the “privilege of chaebol,” the word used to refer to Korea’s family-run conglomerates, should no longer prevail in the country.

Lee is appealing the five-year sentence that was handed to him by a lower court on Aug. 25. The court convicted him on five charges: bribery, embezzlement, illegal transfer of assets abroad, concealment of criminal profits and perjury at a National Assembly hearing.

During the appeals trial on Wednesday, the special counsel also demanded 10 years each for Choi Gee-sung, the former vice chairman of Samsung who once headed the now dismantled Future Strategy Office; Chang Choong-ki, a former president at the powerful office; and Park Sang-jin, another former president.

For Hwang Sung-soo, a former executive director at Samsung Electronics, the counsel asked for seven years.

All four individuals have been charged with bribery, embezzlement, illegal transfer of assets abroad and concealment of criminal profits.

In an initial ruling, Choi and Chang were each sentenced to four years, while Park was handed down a three-year suspended prison sentence and Hwang received a suspended prison term of two years and six months.

Samsung did not issue an official statement regarding the trial, but a spokesman said the company will maintain a wait-and-see attitude.

Vice Chairman Lee emphasized during questioning at the appeals trial that there was no separate process to secure his management control over Samsung.

It was a cautious move to refute the special counsel’s claim that he bribed President Park in exchange for her administration’s support in a merger that facilitated his inheritance of the Samsung business empire.

“What’s important is what vision I could present as a leader and how employees acknowledged me,” he said. “Enlarging my stake isn’t important at all.”

When the counsel asked if he had plans to take over as chairman of Samsung when his father, Chairman Lee Kun-hee, passes away, Lee Jae-yong said, “I can’t answer definitively because it’s an affair of the future. There is never going to be a chairman title at Samsung Group.”

The elder Lee has remained bed-ridden at Samsung Medical Center since a heart attack in 2014.

Lee Jae-yong also denied new allegations from testimony by Ahn Jong-beom, a former senior presidential secretary for economic affairs under Park, that Lee visited the Blue House to have a one-on-one meeting with the president on Sept. 12, 2014.

The vice chairman said he met the president twice - in July 2015 and February 2016 - adding, “I don’t even need to lie about it, but if I don’t remember it, I am suffering from Alzheimer’s, though it may not sound appropriate.”

President Park, who was impeached last year and remains in detention, refused to appear as a witness in Lee’s appeal, citing health issues.

Despite bitter temperatures of minus 10 degrees Celsius (14 degrees Fahrenheit), curious observers and reporters began lining up at 5 a.m., five hours before the trial, to attend the proceedings, an indication of strong attention to the case surrounding the de facto chief of the country’s top conglomerate.

The Seoul High Court is scheduled to issue a ruling on Feb. 5. It is highly likely the case will go to the Supreme Court, the final court of appeal, regardless of which side wins.