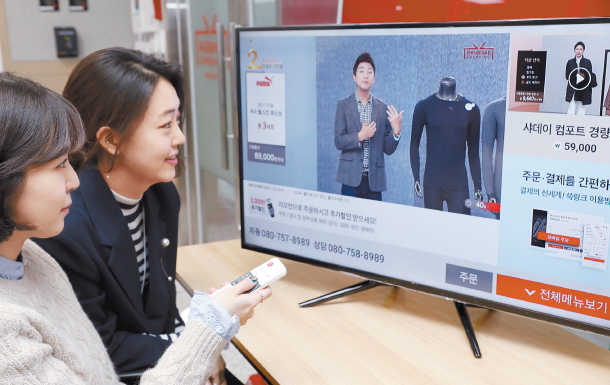 Lotte Homeshopping started the trend by implementing Samsung Pass, a biometric authentication service by Samsung Electronics, on its mobile shopping app in September. The service has shortened login time from 10 seconds to one.

“We decided to make the improvement after requests by our customers in their 20s and 30s to fix the cumbersome login process,” a Lotte Homeshopping representative said.

In addition to streamlining the login process, the company also launched a service to recommend products based on the search history of its customers. The service was introduced by the big data division of Lotte Homeshopping, which was established in March. 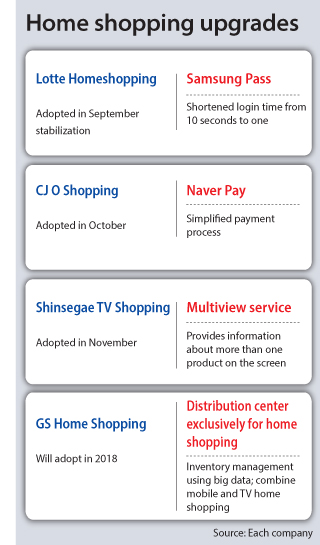 After launching the recommendation service in September, the company said it made 7 billion won ($6.5 million) in sales from the service in the first month. By November, sales stood at 25 billion won.

“Our analysis showed that about 85 percent of the service user are female customers, most of whom are in their 30’s,” said the company spokesperson.

CJ O Shopping decided to team up with Naver to improve its payment system by adopting Naver Pay in October.

CJ also enlisted the help of top celebrities popular among youth to boost sales. In November, the channel featured members of the Korean boy band Super Junior as guest presenters to sell bench coats, reeling in 2 billion won in sales during the session.

“We are trying to provide content specifically aimed at bringing in customers in their 20s and 30s,” said Kim Na-mi, a producer at CJ O Shopping. “We are trying to diversify the broadcasting format by combining it with popular cultural content.”

Shinsegae TV Shopping jumped on the bandwagon with its “multiview” feature in November. The feature allows shoppers to see more than one product on the screen to make price comparisons easier.

“In order to adopt this system, we started developing picture-in-picture technology, which allows the viewing of two different channels simultaneously, in May,” a representative from the company said. “We expect the service will widen consumer choice by giving them information on more than one product at the same time.”

In the Korean retail industry, home shopping networks, which were introduced much later than brick-and-mortar concepts like department stores, are considered test beds for new technologies.

In 2015, GS Home Shopping experimented with virtual reality shopping, and the company is currently building a distribution center in Icheon, Gyeonggi, that will exclusively serve the home shopping service.

“Once construction is complete, it will be possible to manage inventory by making predictions based on season and time of year,” a GS Home Shopping representative said. “By automating the distribution process, we will be able to ship 15,000 boxes per hour, triple the amount currently possible.”

Construction of the distribution center is scheduled to be complete by next year.