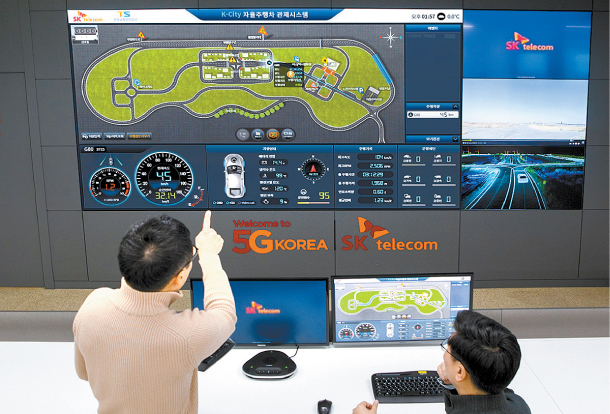 SK Telecom researchers monitor data from a self-driving car at the 5G control center inside K-City in Hwaseong, Gyeonggi, on Thursday. [SK TELECOM]

SK Telecom has installed a high-speed 5G network in K-City, a testing ground for self-driving cars that the Korea Transportation Safety Authority is building in Hwaseong, Gyeonggi.

The telecom company said in a statement Thursday that this is the first time a 5G network has been installed in a test site for self-driving cars.

K-City, modeled after Michigan’s M-City, is a 363,000-square-meter (90-acre) test site for autonomous cars under construction by the Korea Transportation Safety Authority. While the project is scheduled for completion by the second half of next year, a 1-kilometer (0.6-mile) five-lane road is already open for testing, and 5G service will be available there.

“After only three months of construction, SK Telecom and Korea Transportation Safety Authority were able to set up a 5G test network with data transmission speed of 20 gigabits per second,” SK Telecom, the country’s largest telecom company, said in a statement. “The speed means the network can transfer a 1-gigabyte movie in only 0.4 seconds.”

The company said it has also set up a control center for 5G that can share data with test cars in less than 0.001 seconds and infrastructure that increases the precision of three-dimensional maps for cars.

Under such settings, Korean automakers and tech giants working on self-driving cars can test various scenarios such as a child running into the road. According to SK Telecom, cameras and sensors attached to streetlights can detect hazards and share the situation with the 5G control center and nearby self-driving cars in just seconds to prevent an accident.

There are a number of countries with self-driving car test sites set up, but no others, including M-City, have a 5G network, according to SK Telecom.

Sweden, which operates a testing ground called AstaZero, is expected install 5G at the site next year.