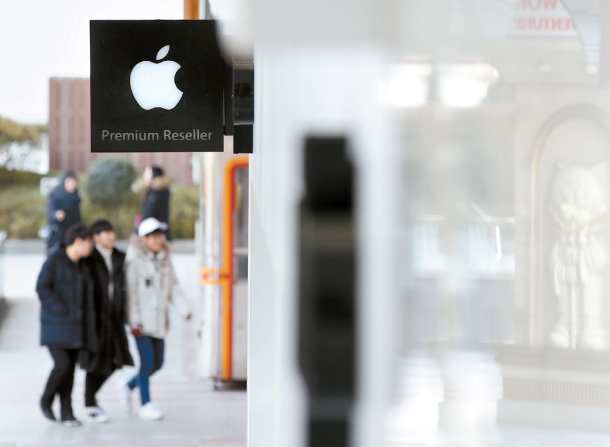 Customers enter an Apple resale store in Seoul on Thursday. Nearly 67,000 iPhone owners in Korea have applied for a lawsuit against the company for deliberately slowing down old models to save battery power. [YONHAP]

Nearly 67,000 iPhone users in Korea have applied to join a lawsuit against Apple as of Friday after the company admitted to deliberately slowing down the performance of older models to prolong battery life.

The number of potential plaintiffs doubled in a matter of hours from 34,000 applicants in the morning to 66,800 by 5 p.m., according to Hannuri Law, the firm taking on the case.

Owners of the iPhone were infuriated after Apple revealed on Dec. 20 that a feature in the iPhone 6, 6S, SE and 7 reduces their processing power to prevent the devices from unexpectedly shutting down. Customers were unaware that the feature existed.

Apple issued an apology on Thursday and vowed to lower the price of an out-of-warranty iPhone battery replacement from $79 to $29 for all customers around the world from late January to the end of next year. It also promised to issue a software update that lets users check battery health and performance.

“We know that some of you feel Apple has let you down,” Apple said in a statement. “We apologize. We have never - and would never - do anything to intentionally shorten the life of any Apple product, or degrade the user experience to drive customer upgrades.”

But judging from the number of people who signed up for the class action suit on Friday, Apple’s mea culpa was not enough to assuage customers’ outrage over the battery problem.

“Apple did create a compensation plan, but it is too light considering the illegality of its actions and the damage customers had to bear, especially for those who already changed phones instead of replacing batteries,” Hannuri said in a statement Friday.

The firm argues that under Korean law, Apple is obligated to inform customers about all aspects of software upgrades to allow them to make optimal purchasing decisions.

Hannuri is still weighing its options as to what kind of lawsuit it will file against Apple, but attorney Ku Hyun-ju confirmed that the team would make a move by early next year after taking as many plaintiff applications as possible through Jan. 11.

Earlier in the week, at least eight class action suits have already been filed against Apple in the United States and Israel. The largest is reportedly a $999 billion class action suit filed by Violetta Mailyan, an iPhone owner in California.

However, class action suits are not available in Korea except in the financial securities sector, so victims must actually participate as plaintiffs to benefit from the case.

Hannuri said it will decide on a legal path with plaintiff applicants by mid-January and file a lawsuit in early February after monitoring class action suits in the United States and measures taken by Apple.

The firm plans to process the case without receiving retainers, though plans will be finalized next year. Attorney Cho Kye-chang said the firm is likely go without retainers as illegality in the Apple seems clear.

The direct target of a Korean lawsuit would be the Apple headquarters in Cupertino, while Apple Korea could be included as a target because it also hid important information from customers, the firm said.