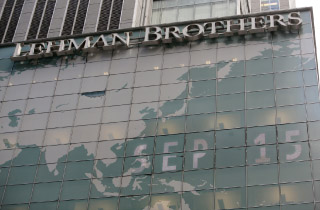 The sign for Lehman Brothers headquarters is seen in New York on Sept. 15, 2008. This year is the 10th anniversary of the Lehman Brothers collapse that sent markets reeling. [AP/YONHAP]

Lehman Brothers filed for Chapter 11 bankruptcy protection on Sept. 15, 2008. I went to work in Seoul with a heavy heart. Many will still remember the aftermath vividly. Retail investors were stupefied by losing half of their money in funds. Authorities fretted about a collapse in the global financial system. The year 2018 is the tenth year since the financial meltdown. It would be wise to return to the painful past to draw insight for future investment.

The cause of the 2008 crisis is complicated. As a market analyst, I have my own theories. Global imbalance was the trigger. Since 2002, the United States had been running ever-widening twin deficits in both fiscal and current accounts. Developing nations, in contrast, were bulldozing away with infrastructure and facility investment and making huge surpluses in their current accounts. Even with double deficits, the United States had to increase liquidity to promote growth and keep up with the galloping developing world.

Excess money supply built bubbles in real estate and resource commodities. Many institutions made a lot of money out of the bubble. So they gave loans to consumers to buy homes even though they were not eligible. The institutions packaged the subprime mortgages into highly risky yet appealing derivatives. Money became short, which should not be strange as all debt-financed binges come with payback time.

Economies have become better in the developed bloc. Some already warn of high asset prices. But things are quite different from ten years ago. The financial market and industry have undergone landscape changes over the last decade. Central banks pumped astronomical amounts of money into the market to resuscitate their lethargic economies, but financial institutions turned conservative about lending. They have deleveraged and strengthened risk management. Real asset and other asset prices rose in sync with underlying business improvements. Global imbalance also eased.

There still exist some dangerous assets, but compared with a year ago, there are sufficient mechanisms to prevent domino ruins. The global economy has evolved into an innovation renaissance. Entirely new levels of technologies, from smartphones to artificial intelligence and self-driving vehicles, have appeared and ushered mankind into the fourth industrial revolution.

If investors keep to sane strategy, they have the opportunity to reap decent returns. The key is in appropriation of assets. Investment should be proportional to life cycle to ensure comfortable retirement. Investors should place differential risky and safe assets according to their age and propensity to venture.

For the outlook for next year’s local stock market, the strong business performers and growers that led the rally in 2017 remain recommendable as buys. Investors also should turn attention to profits in traditional industries. They should study financial statements in disclosures for promising stocks.

Once stocks are chosen, they should set their desired stock price and sell them when they outperform the benchmark index. There are many other investment alternatives for retail investors. Consumers also can invest in real estate, infrastructure, or securities backed by bank loans. Most of them hand out regular dividends to compensate for their long-term maturity. Investors should study whether the estimated return rate is comfortably above the bank deposit rate, the assets are safely leveraged against risk, and profit is promised upon maturity.

We wish one another happiness in the new year. The biggest happiness after good health is an honest increase in riches. I hope all the readers can reap abundant fruits in riches through farsighted and careful investment plans.

*The author is the CEO and President of Korea Investment Management.