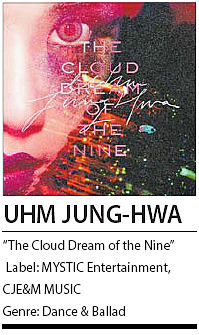 The album titled “The Cloud Dream of the Nine” that singer/actress Uhm Jung-hwa released on Dec. 26 is Uhm’s 10th album as a singer. Last year she released the first part, which included the first four tracks of the album, and then released part 2, featuring another four tracks, on Dec. 13.

The album’s final song, “She,” is a ballad and also the first single. The final song was released on Dec. 26, completing the nine tracks of the album. The singer wrote the lyrics to the song, which serenely and plainly tell her innermost feelings which she says she has kept it in the bottom of her heart until now.

The album is inspired by the Korean traditional story “The Cloud Dream of the Nine,” centering on the artist’s dreams and her fantasies. The various sounds used throughout the album’s nine songs are culled from a wide variety of genres and styles. Other well-known artists are featured on the album including Lee Hyo-ri, Jung Ryeo-won and the late Jonghyun from the K-pop group SHINee.