Seoul seizes another vessel for trading with Pyongyang

Seoul seizes another vessel for trading with Pyongyang 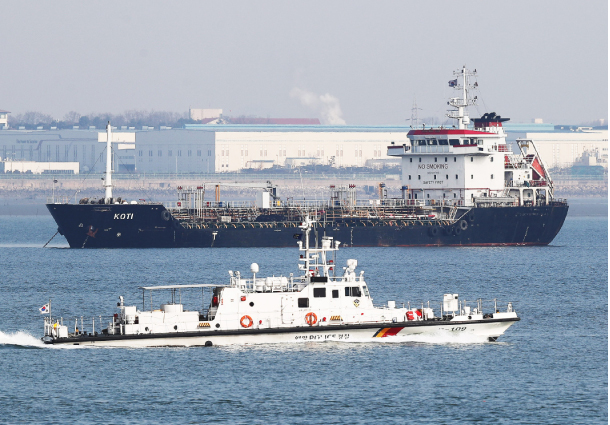 The KOTI, a Panama-flagged ship, seized by South Korean authorities on suspicion of illegal transfer of oil to North Korea on Dec. 21, is anchored Monday in the Pyeongtaek-Dangjin port in Gyeonggi, while a maritime police boat, front, is on watch. [YONHAP]

According to the Pyeongtaek Regional Office of Oceans and Fisheries, the KOTI, a Panama-flagged ship, was seized at the Pyeongtaek-Dangjin port on Dec. 21. The government held an inter-agency meeting to discuss the ship, which can carry 5,100 tons of oil, the office said. The National Intelligence Service and Korea Customs Service are taking part in a probe.

Most of the ship’s crew are from China and Myanmar, an official of the Pyeongtaek Regional Office of Oceans and Fisheries said. “We cannot confirm anything other than the fact that the probe is about a suspected link to North Korea,” he said.

It is the second ship seized by South Korea over suspected oil shipments to North Korea. Last week, the government said it seized the Lighthouse Winmore, a Hong Kong-flagged vessel chartered by a Taiwanese company, over allegations that it transferred 600 tons of refined oil products to a North Korean ship last October in international waters.

The Lighthouse Winmore has been undergoing an investigation in the port of Yeosu, South Jeolla, since November.

UN Security Council Resolution 2397 passed on Dec. 22, 2017 authorizes member states to seize and inspect any vessel in their ports if it has reasonable grounds to believe it was involved in any transport of items prohibited by previous resolutions.

Resolution 2375, passed on Sept. 11, prohibits any state from facilitating or engaging in ship-to-ship transfers to or from North Korea-flagged vessels of any goods or items.

The reports about secret oil supplies to North Korea came as the United States intensifies pressure on China and Russia to stop trade with North Korea.

U.S. Secretary of State Rex Tillerson will co-host a meeting in Vancouver on Jan. 16 with Canadian Foreign Minister Chrystia Freeland to address North Korea issues. Sixteen countries that fought in the 1950-53 Korean War along with South Korea, Japan and India will attend the meeting. Tillerson is expected to ask the so-called “Vancouver Group” to participate in a maritime interdiction campaign to stop illegal trade with the North.

The U.S. State Department issued a statement calling on Russia and other UN members to work “more closely together to shut down UN-prohibited activities, including ship-to-ship transfers of refined petroleum and the transport of coal from North Korea.” “I think you will see increased pressure,” U.S. Defense Secretary James Mattis told reporters on Friday. “What form that pressure takes in terms of physical operations is something that will be determined by the Congress and government.

“Obviously, if a government finds that there’s a ship in their port conducting trade that was forbidden under the UN Security Council resolution, then they have an obligation,” he said. “And, so far, we’ve seen nations take that obligation seriously.”

Asked if the U.S. Navy will participate in some kind of naval blockade of the North, Mattis said, “I don’t speculate, as you know, about future operations by our forces.”

U.S. President Donald Trump criticized China on Thursday in a Twitter message. “Caught RED HANDED - very disappointed that China is allowing oil to go into North Korea. There will never be a friendly solution to the North Korea problem if this continues to happen!”

Sources told the JoongAng Ilbo that the alleged ship-to-ship transfers were made in international waters when the vessels involved turned off their transponders, which transmit their exact locations. Satellite imageries of the vessels were used to detect the illegal trades, they said.

China and Russia, however, denied that they were involved in any dealings in violation of the UN sanctions. The denials by the North’s allies, key trade partners and main oil suppliers, indicate that Seoul, Washington and Tokyo will have to make further attempts to interdict ships smuggling Chinese and Russian oil products to the North.