The 2018 Winter Olympics is only 37 days away and the Olympic torch passed the halfway mark of its country-wide tour on Dec. 21. The torch relay will continue in North Gyeongsang, Seoul, Gyeonggi and Gangwon before arriving at its final destination for the opening ceremony of the Olympics in Pyeongchang on Feb. 9. 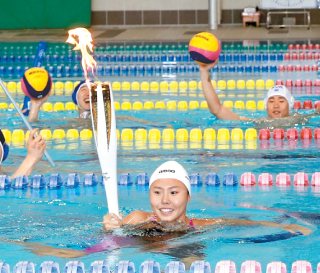 Olympic swimmer An Se-hyeon takes the Olympic torch on a swim at the indoor pool in Jincheon National Training Center in North Chungcheong on Dec. 20. [YONHAP]

The torch took a dip in the pool at Jincheon National Training Center on Dec. 20 as Olympic swimmer An Se-hyeon took it for a swim in North Chungcheong. While at the center it also took a tour of the weight training room with wrestler Kim Hyeon-woo and went for a ride around the velodrome with former track cyclist Cho Ho-sung.

“It was such a fun experience,” said An, who swam backstroke and breaststroke with the torch.

The Olympic torch will have traveled 2,018 kilometers (1,254 miles) in the hands of 7,500 torch runners by the time it reaches Pyeongchang. With a height of 70 centimeters (about 2.3 feet) and weighing 1,318 grams (about 3 pounds), the torch is passed on from one runner to the next at exchange points. 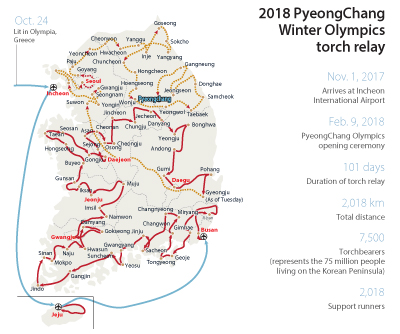 Not only has the torch been carried by a robot in Daejeon, but it has also dived to the seabed in Jeju and ridden on an iron-clad turtle ship dating back to the 16th century in Tongyeong, South Gyeongsang. The torch also rode on the KTX in Osong, North Chungcheong as it continued its tour of the country.

An official from the PyeongChang Organizing Committee for the 2018 Olympic and Paralympic Games (Pocog) said that “there were only three instances over the 50 days when the flames flickered off during the relay. An official from the International Olympics Committee (IOC) complimented us saying our relay performance was ‘excellent.’”

During the Sochi Olympics, the flames went out about 44 times during the 123 day relay.

It is not a serious problem if the flames go out, as torchbearers can always light it again from the safety lantern that has carried the flame from Greece.

The torch headed to Pohang, North Gyeongsang to take in the first sunrise of the year at the popular Homigot Sunrise Square, the easternmost point on the mainland.

It will arrive in Seoul on Jan. 13 and from there it will embark on its journey to the demilitarized zone (DMZ) in Gangwon on Jan. 21.

“There is a standard that it must be someone who’s story is relatable to the international community,“ said an official from Pocog. “But nothing is yet confirmed and even if it was, we cannot reveal any details.”

The plan for the final steps to the cauldron traditionally remains undisclosed until the final countdown of the Olympics. Boxing hero Muhammad Ali, who was fighting Parkinson’s disease at the time, lit the cauldron for the Atlanta 1996 Summer Olympics.

For the PyeongChang Olympics, there are already rumors that “figure skating queen” Kim Yuna will light the cauldron due to her international fame. Predictions are based on past events where the final torchbearer for the winter Olympics has usually been a popular winter sports athlete from the host nation.

Kim’s technique is rated highly by the IOC’s biography of her on their site, with her “technical prowess and bold artistry, executing flawless sequences of the most difficult jumps such as triple lutz and triple toe loops,” intensifying speculation that she will get the nod.

Reuters also reported in April, “It would be a huge surprise if figure skater Kim Yuna does not light the cauldron to start Asia’s first Winter Games outside of Japan.”

After her speech in front of the UN General Assembly on Nov. 13, Kim told reporters that “it would be a great honor to be chosen as the final torchbearer for the ceremony.”

But Pocog could still defy expectations.

For the Seoul 1988 Olympics, three time gold medalist track and field athlete Lim Chun-ae was expected to light the cauldron until the committee changed its mind at the last minute. Instead, young track athlete Kim Won-tak, physical education teacher Sun Man-chung and high school senior dance student Sohn Mi-chung were chosen for the final relay to the cauldron.