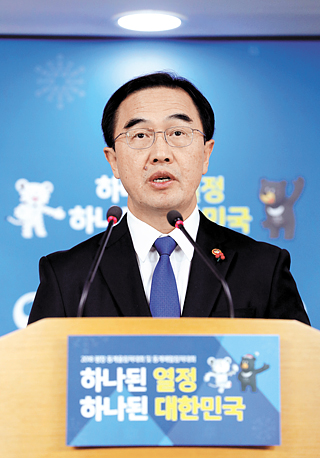 During a press briefing on Tuesday, Unification Minister Cho Myoung-gyon announces that Seoul is proposing high-level talks with Pyongyang next Tuesday on South Korea’s side of the Joint Security Area to discuss North Korea’s participation in the upcoming PyeongChang Winter Olympics. [YONHAP]

Seoul proposed high-level talks with Pyongyang next Tuesday on South Korea’s side of the Joint Security Area to discuss North Korea’s participation in the upcoming PyeongChang Winter Olympics.

The proposal, relayed by Unification Minister Cho Myoung-gyon on Tuesday during a press briefing at the Government Complex in Gwanghwamun, central Seoul, came a day after the regime’s leader, Kim Jong-un, said in a strikingly conciliatory New Year’s address he was willing to send a North Korean delegation to the Games, while adding both Koreas “could urgently meet” to discuss the matter.

Kim’s address was the first response to Seoul’s repeated invitations to join the Olympics, set to kick off on Feb. 9 in South Korea’s northeastern counties of Pyeongchang and Jeongseon and city of Gangneung, several miles from the heavily fortified inter-Korean border.

It was also the first time the North was positive about talks with the South’s liberal Moon Jae-in administration, which last July, offered Pyongyang to hold military talks and discuss a reunion of families separated by the 1950-53 Korean War, both to no avail.

Cho suggested the two sides meet in Peace House, a building in the truce village of Panmunjom controlled by South Korea, but added Seoul would “positively” review any other time, place or format Pyongyang preferred.

The main agenda for the first talks between the two governments since Moon was inaugurated in May 2017 would be North Korea’s participation in the PyeongChang Olympics, said Cho, although Seoul would like to use the occasion to discuss other issues of “mutual interest.”

Asked by a Korea JoongAng Daily reporter whether that includes North Korea’s denuclearization, Cho only replied Seoul would “try to convey what it needs to.”

Cho urged Pyongyang to restore communication channels at Panmunjom as a starter, saying both sides could then discuss specifics for the talks. North Korea shut off all dialogue routes with the South in February 2016 in retaliation for Seoul’s shutting down of the jointly-run Kaesong Industrial Complex following Pyongyang’s fourth nuclear test that January and a subsequent long-range rocket launch.

On whether Seoul’s high-level dialogue proposal was discussed with Washington beforehand, Cho said the government had “intimately discussed” the matter with the United States and other “relevant countries.”

The Donald Trump White House supports maximum pressure on Pyongyang and Trump himself has pooh-poohed the idea of talks even when floated by his own secretary of state, Rex Tillerson.

The Moon government backs Trump’s sanctions campaign but generally holds a warmer stance when it comes to dialogue with North Korea, saying it’s willing to talk at any time, place or in any format, as long as it’s in the service of repairing strained ties.

Cho refused to give any updates on whether Seoul and Washington were discussing the contentious issue of delaying joint military drills this spring, saying he had “nothing more specific to say” after Moon’s remarks last month.

Hours before Cho stood in front of cameras, Moon said during a cabinet meeting in the Blue House Tuesday that he “welcomed” Kim Jong-un’s Olympics statement, urging the South’s Ministry of Unification and the Ministry of Culture, Sports and Tourism to “swiftly restore South-North dialogue and prepare follow-up measures to realize North Korea’s participation in the PyeongChang Olympics.”

In stark contrast to Cho’s hesitance to mention the North Korea nuclear crisis, Moon said the issue “cannot be separate from the improvement of South-North relations,” and therefore, “the Foreign Ministry must closely cooperate with our allies and the international society to simultaneously pursue improved South-North relations and the solving of the North Korea nuclear issue.”

During his New Year’s address, Kim refrained from directly mentioning any conditions for North Korea’s participation in the Olympics or for talks leading up to that decision.

But Kim, who rose to power in December 2011 following his father’s death, allocated a significant amount of time during the 40-minute speech urging South Korea to “respond to our sincere effort to ease tension” and “halt all rehearsals for a nuclear war with outside forces and any acts that involve bringing U.S. nuclear equipment and aggression” to the peninsula.

Local pundits believe Pyongyang might press Seoul to delay the upcoming Key Resolve and Foal Eagle exercises with the United States at the negotiation table in return for its participation in the Olympics.

After months of brushing aside Pyongyang’s calls to abort the drills, highlighting their defensive and legitimate purpose, Moon said last month during an interview with NBC that he had asked Washington to consider delaying the exercises, continuing the U.S. was “currently reviewing it” and that the result would hinge upon “how North Korea behaves.”

The North hasn’t held any missile or nuclear test after that interview was conducted on Dec. 21. The regime’s most recent test was on Nov. 29, when it launched a new Hwasong-15 intercontinental ballistic missile (ICBM) into the East Sea.

South Korean and U.S. authorities admitted it could target any place on the U.S. mainland if it were fired from a proper angle.

In his speech, Kim mentioned the U.S. 11 times, mostly castigations of its North Korea policy and its “brandishing nuclear weapons to provoke war” on the Korean Peninsula. While bragging about its mastering of nuclear technology last year, Kim threatened that the entire U.S. mainland was within the reach of its nuclear weapons, and that the “nuclear button” was always on his desk.

The contrasting attitudes toward Seoul and Washington, and Kim’s abrupt embrace of the Moon administration, which he ignored all last year, has divided South Korea’s political landscape, with opposition lawmakers claiming that the mercurial regime was trying to “make a fool” out of Seoul by pretending to seek peace, while its hidden intention was actually to buy more time to work on its missile and nuclear programs.

South Korean authorities admit that the North has made significant technological advances toward that goal, but doubt it has the capability to fit a nuclear warhead atop an ICBM that can perfectly hit a target after re-entering the atmosphere from space.