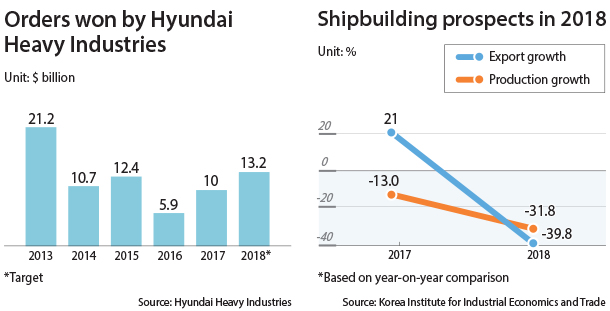 With global demand for new vessels still tepid, Korean shipbuilders are expecting another slow year and lowering revenue targets for 2018.

At Hyundai Heavy Industries, the country’s largest shipbuilder, CEO Kang Hwan-goo cited tough business conditions at home and abroad for lowering its sales target by 2 trillion won ($1.87 billion) this year. The shipbuilder’s 2018 target will be 7.99 trillion won, a reduction of 60 percent from the company’s sales target a decade ago, when it saw better times.

“Last year was a tough one for every member of Hyundai Heavy Industries,” Kang said in his New Year’s address to employees on Wednesday. “However, we are expected to face even direr situations this year.”

According to Kang, the company will exhaust its backlog orders for offshore plants this year, and the market for other products does not appear favorable as demand is showing slower-than-expected recovery.

Rival Samsung Heavy Industries is in a similar spot. Nam Joon-ou, who replaced Park Dae-young as chief executive in December, also acknowledged that the market would be slow in 2018 and emphasized the need to tighten its belt further. The company already reduced the number of its executives by 30 percent in a year-end reshuffle and slashed the number of business units from 89 to 67.

Both Hyundai Heavy and Samsung Heavy have announced plans for a paid-in capital increase and confessed they are expecting an operating loss in the fourth quarter.

Hyundai Heavy Industries said it was expecting a roughly 300 billion won operating loss in the fourth quarter and added the loss would continue through this year. The company plans to issue 1.3 trillion won in new stock, roughly 40 percent of which will be used for research and development and the rest in paying back debt.

Samsung Heavy expects to post a 490 billion won operating loss in 2017 and a 240 billion won loss this year. The grim forecast was announced in December, at the same time as Nam’s appointment to CEO.

To alleviate its financial burden, the company plans to generate 1.5 trillion won in cash this year by issuing new stocks. “As we have once issued new stocks in 2016 already, I hope we can build a firm foundation for recovery,” Nam said.

The recapitalization plan came after its restructuring plans failed to make headway. Samsung Heavy was unable to ink enough orders and lay off enough people due to struggles between labor and management.

Apart from recapitalization, the shipbuilders will strive to cut production costs. Kang at Hyundai pledged to eliminate any unnecessary costs, especially in materials. Citing Chinese shipbuilders that have been growing rapidly on the back of cheaper vessels, Kang said maintaining competitive prices will be key to inking more orders this year. Samsung Heavy plans to minimize mistakes in ship and offshore plant design to reduce the cost incurred from making changes.

Shipbuilders will also focus on research and development as eco-friendly has become an agenda item in the industry. Starting in 2020, the International Maritime Organization plans to tighten emission regulations, and Korean shipbuilders hope to find a way forward by securing “green” technologies faster than competitors.

On Wednesday, Hyundai Heavy announced it had successfully tested a so-called scrubber that filters out toxic chemicals like sulfur oxides and hydrochloric acid by washing out emitted gas from ship engines with water.

The device, which Hyundai developed independently, is 35 percent smaller in size compared to existing devices in the market produced by European manufacturers, according to the shipbuilder.