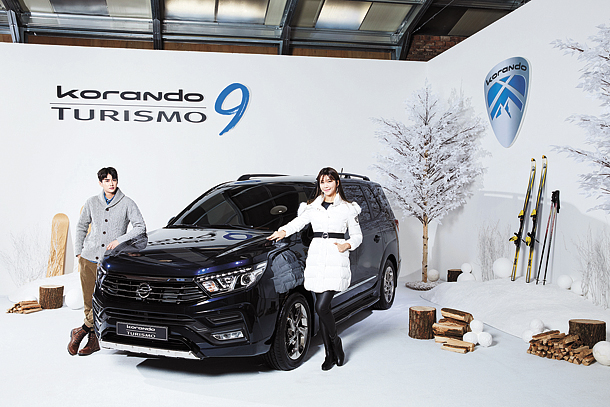 SsangYong Motor launched the new version of its large SUV Korando Turismo on Wednesday in an effort to diversify the company’s steady sellers. [SSANGYONG MOTOR]

As part of an effort to diversify the company’s steady sellers, SsangYong Motor is ramping up its portfolio by introducing a number of new vehicles early in the year, including the upgraded Korando Turismo.

SsangYong, a sports utility vehicle (SUV) producer and the Korean unit of Indian auto giant Mahindra and Mahindra, announced the launch of the face-lifted Turismo on Wednesday, an SUV designed for outdoor activity enthusiasts.

The new Turismo is the latest addition to the Korando family, launched in 1983. Korando, which also includes Korando C and Korando Sports, is the longest surviving Korean vehicle name.

“The latest trend in the global automobile industry is vehicles that combine the utility of MPVs [multi-purpose vehicles] and the exterior of SUVs,” said Lee Seok-woo, general manager of marketing at SsangYong, during a press conference on Wednesday in Seoul.

“Unlike its predecessor, the upgraded Turismo adopted an SUV-like appearance to target this trend and we maximized its utility for different outdoor leisure activities as well.”

The 2.2-liter diesel-powered SUV features dual flex seats that use the Pullmaflex spring system, which the company claims works by “evenly distributing the weight of the driver and passengers to make long-distance driving more comfortable.”

The same seat is used for the top-selling small-sized crossover Tivoli.

The company aims to sell over 12,000 Turismos this year, about a thousand each month, according to a spokesperson from SsangYong.

The sales goal, which is triple the amount sold in 2017, shows the company’s bid to move away from its heavy reliance on certain models.

A day earlier on Tuesday, SsangYong also announced the release of the new Rexton Sports, which the company said will help Ssangyong “overcome the growth limit in the domestic market.”

Last year the company sold a total of 106,677 cars in the domestic market, according to data provided on Tuesday.

More than half the models sold, at 55,280, were from the Tivoli lineup.

The price of the new Turismo, which could be purchased as either a nine-seater or 11-seater, in Korea ranges from 28.38 million won ($26,657) to 52.20 million won depending on the trim and options.

The company plans to export the new Turismo to the Middle East and Europe, according to the spokesperson, although the exact schedule is undecided.