Moon toots horn on icebreaker to buck up shipbuilders

Moon toots horn on icebreaker to buck up shipbuilders 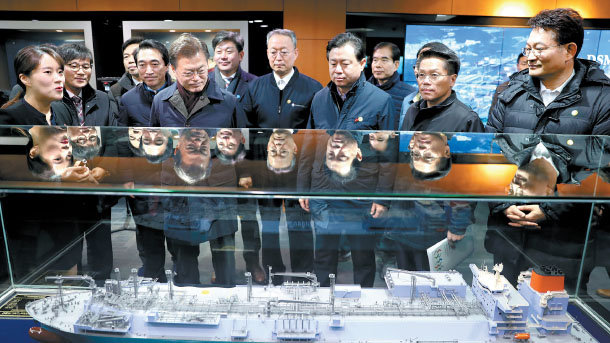 President Moon Jae-in listens to a briefing on icebreaker tankers while viewing a model of such a ship at the Okpo Shipyard of Daewoo Shipbuilding and Marine Engineering in Geoje, South Gyeongsang, on Wednesday. It was Moon’s first tour of an industrial facility or company in 2018. During the visit, he received a briefing about a contract the company won in 2014. Daewoo Shipbuilding won the deal, worth ＄4.8 billion, to build 15 so-called ice-class tankers to transport liquefied natural gas (LNG) in frozen waters. [YONHAP]

President Moon Jae-in Wednesday inspected an arctic liquefied natural gas tanker project at a shipyard on southern Geoje Island and pledged support to restore Korea’s competitiveness in the shipbuilding industry and to promote his “new northern policy” aimed at expanding cooperation with Russia and Eurasia.

Moon visited the Okpo Shipyard of Daewoo Shipbuilding and Marine Engineering in Geoje, South Gyeongsang, and was briefed about the contract the company won in 2014. Daewoo Shipbuilding won the deal, worth $4.8 billion, to build 15 so-called ice-class tankers to transport liquefied natural gas (LNG) in frigid waters.

According to Daewoo’s presentation, the company won the tender to build 15 icebreaker tankers to transport LNG in the Yamal project. The project, aimed at developing natural gas reserve on the Yamal Peninsula in western Siberia, is a joint venture by Russian gas producer Novatek, France’s Total and China’s Comprehensive National Power (CNP) and Silk Road Fund.

He boarded The Vladimir Rusanov, the fifth. The vessel will leave the shipyard today for a one-month icebreaking trial before starting commercial operation. Moon sounded the tanker’s horn three times from the wheelhouse.

Moon gave a speech on the deck praising the Korean shipbuilding industry. “As I stand on this ship, which can break two-meter [6.5-foot] thick ice and sail in extreme environments with cold of minus 52 degrees Celsius [minus 61 degrees Fahrenheit], I think about the future of Korea’s shipbuilding industry,” Moon said. “In world history, no country that gave up on maritime affairs was able to become a superpower. We have been an open trader and we will have to continue on the path. A vision to become a strong maritime power is a national task that we must never give up.”

Noting the hardships the industry has suffered over the past few years, Moon said he has faith in its recovery.

“The government will offer all possible support for the industry to win more projects, particularly LNG tankers,” Moon said.

Earlier, Moon was briefed about the prospects for the industry and was told there is demand for 60 to 80 more LNG tankers around the world.

He promised that the government will commission more public vessels and offer a $1.9 billion program to boost the private sector’s orders of LNG tankers. The government will present an innovative growth strategy for the shipbuilding industry during the first quarter of this year, Moon said.

Moon had lunch with workers at a cafeteria. The visit was Moon’s first tour of an industrial facility or company in 2018. A Blue House official said it was intended to express his strong will to push forward the “New Northern Policy.”

“The government launched the Presidential Committee on Northern Economic Cooperation in August,” the official said. “In September, Moon also proposed to build ‘nine bridges’ between Korea and Russia in his speech at the Eastern Economic Forum. That is why he chose to visit the shipyard that is building icebreaker tankers.”

At the forum, Moon proposed that Korea and Russia cooperate in nine sectors.