The night before the deal

The night before the deal 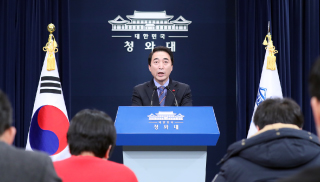 In December, Park Soo-hyun, the Blue House spokesman, delivers President Moon Jae-in’s position on the results of a task force’s re-examination of the so-called comfort women agreement struck in 2015 between the Park Geun-hye administration and Shinzo Abe government. [YONHAP]

At 11 p.m. on Dec. 27, 2015, the day before the so-called comfort women agreement, the Blue House chief of staff, Lee Byung-kee, received a call from Shotaro Yachi, head of Japan’s National Security Council.

“This is an urgent issue,” Yachi reportedly said. “The agreement must include the removal of comfort women statues.”

“What are you talking about?” Lee shot back. “If so, Foreign Minister Fumio Kishida should not come tomorrow.”

“Is this what President Park Geun-hye wants?” Yachi asked.

“I cannot talk to her at this hour,” Lee replied, “but you will hear harsher things than my words. I am hanging up.”

Thirty minutes later, Yachi called Lee again and said, “I see. We will do as you please.”

The intense negotiation continued until the last minute. I confirmed the conversation from key figures involved in the negotiation with the condition not to report it.

However, I am writing about it in light of a task force’s false finding that the Park administration hurriedly — and unilaterally — made concessions in a behind-the-scenes agreement.

In a statement following the task force’s announcement, current President Moon Jae-in said, “Serious faults in contents and procedure have been confirmed. Once again, it is clear that the deal cannot resolve the ‘comfort women’ issue.”

Why would Korean officials involved in the negotiations make such an agreement knowing that they would be branded as “traitors” in a few years?

Those who thoroughly follow the comfort women issue will not deny that the agreement contains quite a bit of progress.

The other confidential six clauses were not the result of an under-the-table deal as the task force said. It was a sort of “agree to disagree” compromise. When Tokyo refused to fund memorials overseas, Seoul asserted it was out of the government’s reach. It may be too much to call that a behind-the-scenes deal.

In two other clauses, the government reiterated its current stance and basic policy. It was not much different from the current government’s “three no’s” to China.

President Moon advocates “resolution for the victims.” It sounds very nice. But the victims and their families have different positions.

While civil groups say they represent the positions of victims, it is not the case due to political and media distortion. Structurally, it is hard to expect a solution that will satisfy all victims 100 percent.

Japan says it cannot move even one millimeter from the agreement. A former State Department official says he is sick and tired of the fracas. Renegotiation is nearly impossible for the Moon administration in the next four or five years.

Here, I pay attention to the part of the task force report that said, “Historical issues like the ‘comfort women’ cannot be addressed in the short term through diplomatic negotiations or political compromise.”

It may be the true intent of the Moon administration to keep the history card in hand by playing an ambiguous stance, since a renegotiation will lead to criticism anyway.

I am rather concerned about the victims. There were 46 survivors at the time of the Dec. 28 agreement, but after two years, only 32 remain, and their average age is 91.

Is it honoring them to let them see the issue going back to the beginning before they pass away? Is it really for the sake of the victims? I am not confident enough to say yes, so can the government say yes?