Gov’t is in a tricky position as won suddenly appreciates

Gov’t is in a tricky position as won suddenly appreciates 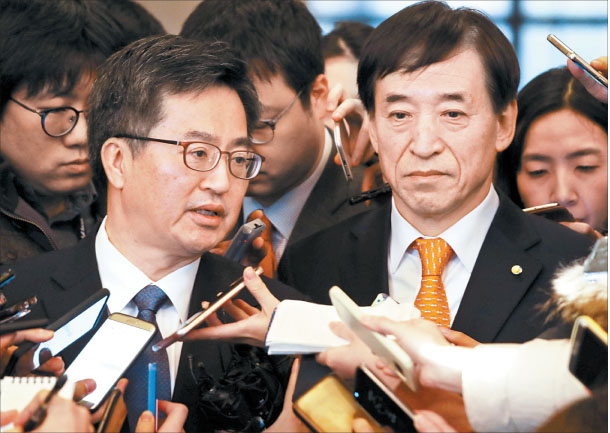 Bank of Korea Gov. Lee Ju-yeol and Finance Minister Kim Dong-yeon said the government will actively intervene in the market if the value of the won appreciates too fast.

“We will respect the value decided on by the market, except if there is excessive movement,” Lee said Thursday. “It is a fact that there is concern about the recent appreciation of the won and we are closely monitoring the situation.”

Finance Minister Kim said he agrees with the governor on the issue.

Since the beginning of this year the won has been appreciating at an alarming rate. The value of the won against the U.S. dollar has fallen to as low as 1,060, a range it hasn’t seen since October 2014. The won closed at 1,062.2 yesterday, which is 2.3 won stronger compared to the previous close last Thursday.

The appreciation started on the first working day of this year, Jan. 2, when the won’s rate against the dollar shed 9.3 won compared to the last trading day of last year, Dec. 28, closing at 1,061.2 won. The sudden appreciation alarmed the market and there was speculation that the drop would have been steeper if not for alleged government intervention.

On the same day, Finance Minister Kim commented that while the government would act on sudden and overly abrupt changes, its general policy was to leave the value to the market.

“It is likely that the current weakening of the U.S. dollar and the strengthening of the won will continue for the time being as the U.S. fiscal deficit is expected to increase due to the tax cut and the Fed’s interest rate hikes will not be at a rapid pace,” said Kim Hwan, an NH Investment and Securities analyst.

As always, there are concerns about a stronger won’s impact on Korean exports.

“As there is a possibility that the won could fall to 1,000 won against the U.S. greenback, the burden on Korean exporters will likely increase,” said Kim Dooun, a Hana Financial Investment researcher.

According to the Korea International Trade Association, when the value of the won rises 10 percent, the short-term operating profits of Korean manufacturers drop 1.3 percent.

When the value of the won rises 1 percent, the volume of export goods shrinks 0.12 percent.

Also, if the won appreciates faster than the Japanese yen against the U.S. dollar, Korean companies’ competitiveness suffers, as the countries export many of the same goods.

Last year the won appreciated 13.83 percent against the U.S. dollar, but the yen only rose 4.68 percent.

In fact, the Korean won saw the second-most appreciation against the dollar, following the euro, which strengthened 15.34 percent.

Korea is under pressure to let the won rise to avoid being labeled a currency manipulator by the U.S. government.

Korea remains on Washington’s watch lists with other U.S. trading partners including Germany, China, Japan and Switzerland. In its last report in October, the United States raised concerns about the Korean government intervening in the FX market, limiting the appreciation of the won.

“The United States should not and will not bear the burden of an international trading system that unfairly disadvantages our exports,” the U.S. Treasury said in the report.

One of the reasons behind the recent appreciation of the won was positive expectations for the Korean economy. Last year growth probably exceeded 3 percent for the first time in three years.

This year the economy is expected to enjoy a current account surplus of $79 billion, which is the similar to last year’s $81 billion.

Additionally, geopolitical tensions have been simmering down since North Korean leader Kim Jong-un in a New Year’s message hinted at the possibility of talks with South Korea.

This made won assets more appealing to investors.

But the government is reluctant to intervene in the market ahead of a renegotiation on the bilateral free trade agreement with the U.S.

And some welcomed the appreciation of the local currency, including Koreans that purchasing goods from overseas and families with children studying abroad.

“For those who need to wire money overseas or preparing for overseas travel, it would be best to purchase their dollars in installments after periodically checking the exchange rate for a month or every three months,” said Ko Jae-pil, a KEB Hana Bank Gangnam PB center official. He also cautioned those investing in dollar-denominated bank accounts.