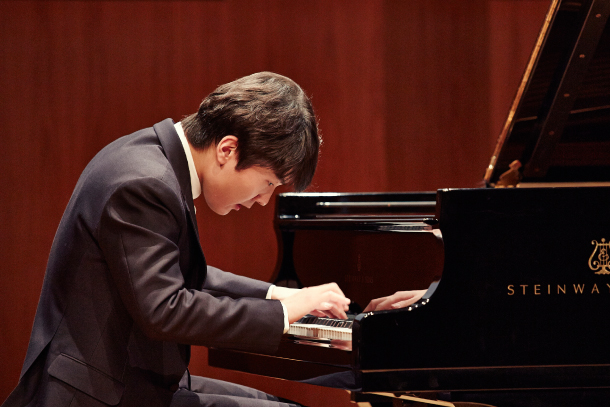 Pianist Cho Seong-jin, on Thursday, plays some of the music included in his upcoming recital at the Seoul Arts Center in southern Seoul. [CREDIA]

Korea’s star pianist Cho Seong-jin is kicking off his first-ever tour across Korea, starting Sunday at the Busan Cultural Center and followed by two concerts at the Seoul Arts Center on Jan. 10 and 11.

After winning the prestigious International Chopin Piano Competition in 2015, the pianist has been living a busy life, performing at least once every four to five days both in and outside of Korea. However, this is his first time to tour his motherland and he’ll be making stops in four cities - Seoul, Busan, Jeonju and Daejeon.

“In the last year, I’ve performed about 100 times,” says Cho, adding that only few of them were in Korea. “I’m glad to perform more in Korea this year and meet with Korean fans.”

To introduce his local schedule for this year to his fans, Cho held a press conference and invited not only the media, but also 400 fans to the IBK Hall of the Seoul Arts Center in southern Seoul on Thursday.

“I included Beethoven in the program as he is the composer I respect the most,” he said. “When I read his music, I am astonished every time as I get to find new musical ideas and unexpected chords.”

Perhaps because he is on a roll, Cho said he was surprised that he had nothing to wish for this year.

“I spent New Year’s Eve with my family in Berlin and my parents asked me what am I going to wish for, and I didn’t know what to say,” said the pianist.

But the pianist says he has a long-term goal, which is to erase the stereotype people have of Asian musicians.

“Thankfully, I haven’t been racially discriminated against so far, but I hear often that there is discrimination against Asian musicians in the West,” Cho said. “I believe it has become better as those who have come before me have proved them wrong through great performances so I intend to do the same and contribute in making a better road for young musicians to come.”

The 23-year-old pianist also has a specific plan for the future, which is to perform Brahms’ music when he is in his 30s.

“One of my favorite composers is Brahms, but I haven’t played his music as much as I have played other composers,” said Cho.

“That is mostly because I wanted to take time and study his music more, and perform it after making it my own.”

Cho also joked he’s going to gain more weight before playing Brahms, which is another mission he’s given himself.

“Your weight and the sound of the piano are related, and I think to play Brahms, I have to become more plump,” chuckled Cho.

After the tour, his next scheduled performance in Seoul is on Sept. 12, when he will be performing with violinist Chung Kyung-hwa to celebrate the 30th anniversary of the Seoul Arts Center.