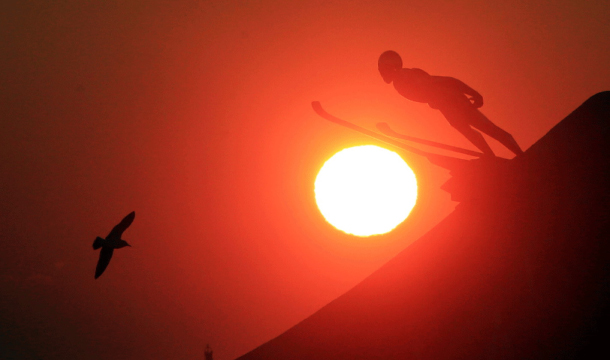 The sun rises over a ski jump sculpture in Gangwon, where the PyeongChang Winter Olympics will take place in February. [YONHAP]

It was astonishingly agile and bold. China and Japan are in surprise, trying to understand Moon’s next move. Moon, however, said that the split in South Korean opinion is a more difficult problem than the North Korea issue.

The road to PyeongChang is still bumpy. If the North fires a missile around the time of the opening ceremony on Feb. 9, the peace of PyeongChang will be ruined.

In such a situation, the people’s unity is the ballast water that will stabilize a rocking ship. A country of separation, conflict, hatred and retaliation is easily overthrown by outside influences.

The peace of PyeongChang can only fly when the two wings of inter-Korean talks and South Korean unity are open. There is an easy — and speedy — way to win unity. How about Moon inviting former President Lee Myung-bak, a conservative rival, and his wife to attend the opening ceremony of the Games together? Many people will be surprised by Moon’s offer of engagement to put national interests before politics.

The former and current presidents’ appearance in PyeongChang will symbolize the Korean people’s strong unity and patriotism, undeterred by the worst-ever security crisis. It will be an impressive moment for the world.

Moon’s hard-core supporters may be angry about the idea of offering amicable treatment to Lee because they see him as the starting point of so-called “past ills” and a target to destroy. But Lee’s wrongdoings have not been proven yet. The campaign to eradicate “past evils” is not intended to destroy a person. It must target our outmoded political culture and system.

Moon supporters believe that the late President Roh Moo-hyun committed suicide because of Lee’s political retaliation. But that is just dogma. Moon, as Roh’s closest confidant, knows it better than anyone. In his interview with Hankyoreh in 2009 after Roh’s funeral, Moon said, “I don’t want to argue that it was murder by political retaliation.”

It is little known that Lee had actually ordered the prosecution not to make an attempt to detain Roh and instead had them visit Bongha Village, Roh’s hometown, to question him. Roh made his own decision to show up at the prosecution for questioning.

Therefore, the belief of Roh loyalists that their revenge of Roh’s death should conclude with the arrest of Lee has nothing to do with facts. It is simply misguided faith.

As the PyeongChang Winter Olympics is an incredible gift, Moon is using it as a fascinating tool to end a crisis on the peninsula. But do you know that Lee created that gift?

When Roh’s Olympic bids failed twice, Lee made a third attempt and succeeded. In 2009, Lee issued a special presidential pardon to Samsung Chairman Lee Kun-hee, who was a member of the International Olympic Committee, putting an enormous burden on the tycoon to work for the bid.

The fruit of the PyeongChang Winter Olympics now goes to Moon. Without the efforts of Lee Myung-bak and Lee Kun-hee, it would never have been possible. A country’s continuity must be maintained even if an administration changes.