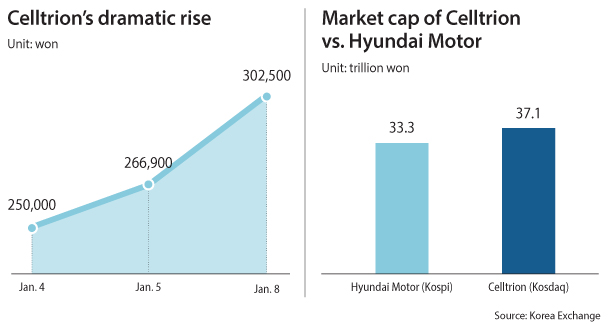 The market cap of Celltrion, a biopharmaceutical producer, has overtaken that of local auto giant Hyundai Motor on Monday after its share price rallied over the weekend.

As a result of the drastic price hike, the market cap of the pharmaceutical giant reached 37.1 trillion won Monday, exceeding the market cap of Korea’s biggest automotive company Hyundai, which currently ranks at third on the primary Kospi with a market cap of 33.2 trillion won. Hyundai closed Monday at 151,000 won per share, up 1.34 percent from the session on Friday.

According to market analysts, the recent Celltrion rally is a result of the improving investor sentiment that the company’s biosimilar products will quickly gain a market share in Europe as well as in the United States, the world’s biggest pharmaceutical market.

Kang Yang-koo, an analyst from HMC Investment Securities, said that the market share of Truxima in Europe stood at seven percent as of the third quarter last year, outpacing Remsima in terms of speed of market penetration.

Kang also projected that the market share of Remsima in the United States, where the company received permission for its sale from the U.S. Food and Drug Administration (FDA) in April last year, will surpass 15 percent this year.

“The rapid rise of the share price is also reflective of the expectation that Herzuma will be released in Europe without any problem and quickly gain a share in the market just like the other drugs,” explained Kang.

Herzuma is a biosimilar version of trastuzumab, a breast cancer and gastric cancer treatment antibody drug known by its brand name Herceptin, patented by Swiss drug firm Roche. It is likely to gain approval by the European Medicines Agency (EMA) and go on sale in Europe during the first quarter of this year.

“After Europe, we expect that Celltrion will gain approval for Herzuma and Truxima by the U.S. FDA in August or September,” the analyst added.

Still, other analysts explained that the market is taking uncertain future events into consideration prematurely and that it is possible that there will be a dramatic price fluctuation in the near future.

“The positive market sentiment we saw early in the year is mainly centered on the drugs that are yet to go on sale,” said an analyst who requested anonymity.