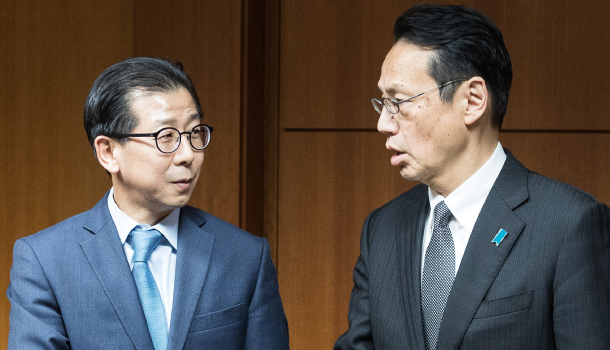 The Ministry of Foreign Affairs plans to announce measures today to follow up on a task force’s review of the controversial agreement between Seoul and Tokyo in 2015 to resolve the issue of Japan’s wartime sexual slavery of Korean women, a government source said Monday.

According to the source, the Moon Jae-in administration will first urge Japan to take responsible action to make up for flaws in the bilateral agreement instead of proposing a renegotiation or scrapping it.

“The Foreign Ministry has decided to make the announcement before Moon’s New Year’s press conference on Wednesday,” the source said. “The ministry will urge Japan to take responsible measures toward this wrongful agreement based on the seriousness of the issue and universal principles of humanitarianism.”

The source, however, said the government would not propose a renegotiation or termination of the agreement.

Last year, Moon ordered a review of a deal that his predecessor made with Japan to compensate the so-called comfort women who were drafted into sexual slavery during World War II.

Following the task force’s work, Moon issued a statement on Dec. 28, calling the agreement between Seoul and Tokyo “highly flawed." He promised that his administration would take follow-up measures to meet the needs of survivors because the agreement failed to settle the issue.

The two countries agreed that the settlement was “final and irreversible” as long as Japan faithfully followed through with its promises.

Japan later transferred 1 billion yen ($8.83 million) to the Reconciliation and Healing Foundation set up in Korea to help survivors.

According to the government source Monday, today’s announcement will also include the fate of the foundation and the money.

Korea’s foreign minister had hinted on Sunday that the government could return a cash payment provided by Japan to compensate Korean women forced into wartime brothels by the Japanese military.

Foreign Minister Kang Kyung-wha made the comment while meeting with one of the surviving victims at Severance Hospital in western Seoul and promised to reflect the women’s positions on the issue.

“The government will handle the money issue in a way you will be satisfied with,” Kang told Kim Bok-dong, 92, during their meeting on Sunday. She was responding to Kim’s request that the government return the compensation money to Japan.

“We can raise our voice only after we return the money,” Kim said.

“We are considering it,” Kang responded. “The government has enough money.”

Kim also complained about why the government did not dismantle the foundation.

“You keep giving salaries to the foundation staff, so the money is being wasted,” she told Kang.

The foreign minister concurred. “I agree that it makes no sense to pay the salaries with that money,” she said.

The conversation was made public through the Facebook account of Yoon Mi-hyang, head of the Korean Council for the Women Drafted for Military Sexual Slavery by Japan. Yoon posted a two-minute video of the meeting between Kang and Kim.

Kang’s comment was also made public on the eve of a director-level talk between Seoul and Tokyo to discuss the issue.

Kanasugi is scheduled to meet with Kim Yong-kil, Korea’s director general of Northeast Asian affairs, to discuss the issue. Japanese Prime Minister Abe has made clear that Tokyo will not budge to renegotiate the agreement, pressuring the Moon administration to respect the deal.

In addition to the comfort women issue, Kanasugi will meet with Lee Do-hoon, special representative for Korean Peninsula peace and security affairs, to discuss North Korea.

Kanasugi and Lee are both chief negotiators in the six-party talks.