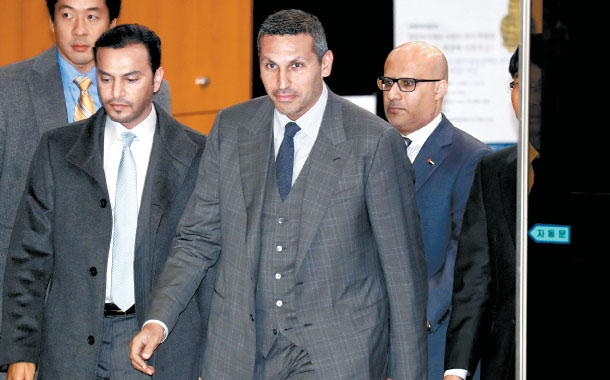 An influential adviser to the royal family of the United Arab Emirates, Khaldoon Al Mubarak, center, lands in Korea on Monday amid continuing speculation about the presidential chief of staff’s abrupt visit to the Middle Eastern country last month. [KANG JUNG-HYUN]

An influential adviser to the royal family of the United Arab Emirates visited Korea on Monday amid continued speculation about the presidential chief of staff’s abrupt visit to the Middle Eastern country last month.

Khaldoon Al Mubarak, chairman of the Executive Affairs Authority of Abu Dhabi and chairman of the Emirates Nuclear Energy Corporation, arrived at Gimpo International Airport in the morning on a private jet. Sources informed about his trip said he will stay in Korea for two days.

Little is known about his itinerary or purpose of visit. He met with Chung Sye-kyun, speaker of the National Assembly, in the afternoon and visited GS Group to meet with its chairman, Huh Chang-soo.

Speculation also grew that Al Mubarak might meet with President Moon Jae-in or his chief of staff, Im Jong-seok, though the Blue House refused to confirm any information about the UAE leader’s visit.

Moon sent Im to the UAE in December as his special envoy, stirring controversy. Although the Blue House initially insisted that Im’s trip was meant to cheer up Korean troops deployed in the Middle East, it later backtracked on that explanation.

During the trip, Im met with Sheikh Mohammed bin Zayed bin Sultan Al Nahyan, the crown prince of Abu Dhabi, and Al Mubarak. While the Blue House refused to elaborate on the purpose of Im’s visit, opposition politicians said the two countries’ relations must have been damaged and Im was sent urgently to mend ties.

Korea’s relations with the UAE rapidly advanced under the presidency of Lee Myung-bak. The two countries formed a strategic partnership during Lee’s visit to the country in 2009.

Korea also won a $18.6 billion deal to build the UAE’s first nuclear reactor in 2009 and construction is currently ongoing. Korea also dispatched the Akh Unit, about 150 troops including special forces and counterterrorism troops, to the UAE in 2011 at the request of the country’s crown prince.

Politicians said the nuclear plant project is in jeopardy because of the rumors spreading in Korea about corruption in the deal and the Moon administration’s nuclear phase-out policy.

Other reports suggested that the Moon administration’s attempt to change a secret military cooperation deal between the two countries backfired.

According to government sources, a secret agreement was made between Korea and the UAE under the Lee administration in which Korean troops would automatically intervene if a military situation takes place in the UAE.

The Moon administration wanted to change the terms, the sources said, and the UAE strongly protested, prompting Im’s trip in December.

“The Lee government proposed the military cooperation deal, which amounts to a mutual defense treaty, to the UAE in order to win the nuclear plant bid,” a government official told the JoongAng Ilbo on Sunday.

France, Korea’s main competitor in the bid, offered a nuclear umbrella and joint military drills to the UAE as a package deal and Korea had to up the ante, the source said. The arrangements of military cooperation were stated in secret provisions and memorandum of understanding, which do not require the National Assembly’s ratification, the source said.

“One of the secret terms was that the Akh Unit will defend the UAE’s royal regime militarily,” he said.

A former senior foreign affairs official in the Lee government confirmed the arrangement.

“In order to secure a bridgehead in the Middle East, we decided to target the UAE,” he said. “So we offered what the UAE wanted on the sidelines of the nuclear plant deal.

“Because of the sensitive security affairs in the Middle East, we concluded that the military agreement must be kept secret,” he added. “It is undesirable for this issue to be made public now for the sake of national interests.”

A diplomatic source told the JoongAng Ilbo that the secret agreement signed during the Lee presidency was discovered during the Foreign Ministry’s recent review. Moon, a liberal, has pushed forward a campaign to eradicate “past evils,” largely reversing many contentious legacies of his two conservative predecessors.

“Defense Minister Song Young-moo visited the UAE in November and explained that the secret terms must be revised or deleted,” the source said. “Or else, he told the UAE that it must be ratified by the National Assembly.”

Yoon Soon-gu, deputy minister of political affairs at the Foreign Ministry, accompanied Song to the UAE.

“It is rare for a deputy foreign minister to accompany the defense minister’s overseas trip,” the source said. “It means that Song discussed a treaty or an agreement equivalent to a treaty.”

It is clear that Korea’s military cooperation with the UAE was on the agenda for Khaldoon’s trip, judging from the 40-minute meeting he had with Speaker Chung, though Chung’s office said the meeting was nothing more than a courtesy call reciprocating his visit to the UAE last April.

A source from Chung’s office said no sensitive issues were discussed.

Still, according to the source, Chung did mention the Akh Unit to Khaldoon.

“The speaker said the National Assembly will continue to support the extension of the Akh Unit’s deployment,” he said.

Formally known as the UAE Military Training Cooperation Group Akh Unit, the team so far has had more than a dozen rotations. The 13th contingent was sent to the UAE on Nov. 10, 2017, for an eight-month mission.