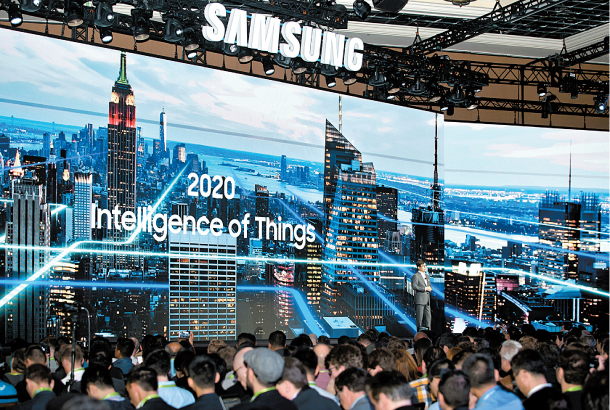 Samsung Electronics on Monday vowed to make all of its products compatible with Internet of Things technology based on artificial intelligence by 2020 as it envisions a future where consumer experience is seamlessly connected.

“We believe IoT should be as easy as flipping a switch. With the new products and services announced today, we’re making IoT easier and more seamless,” said Kim Hyun-suk, president of Samsung’s consumer electronics division and Samsung Research at a press conference a day ahead of the start of the Consumer Electronics Show in Las Vegas. “We’re committed to accelerating IoT adoption for everyone and making all Samsung connected devices intelligent by 2020.”

As an initial step toward achieving the goal, Samsung will unite all of its IoT applications - from Samsung Connect to Smart Home, Smart View and more - under the SmartThings app, allowing any of its smart devices to be controlled directly from a phone, TV or car, by spring.

Currently, Samsung’s different IoT applications are run separately, forcing users to switch between apps depending on what they want to do. 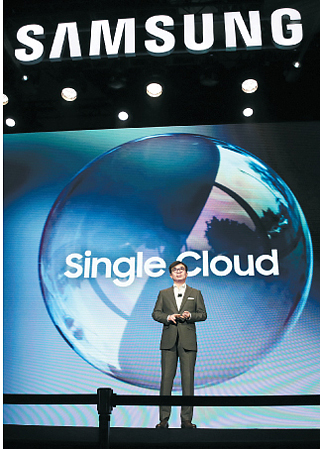 Samsung’s SmartThings Cloud will allow people to control their Internet of Things devices from a single app. [SAMSUNG ELECTRONICS]

“Samsung’s IoT philosophy is built on open innovation, making it accessible to more people and when infused with intelligence, can personalize their experience,” the company said in a release. “Today’s fragmented and complex IoT ecosystem is a barrier to adoption.”

The tech giant also used the global tech show to showcase the first set of components for the self-driving and infotainment solutions it has developed with Harman International, which it acquired in March last year as a wholly-owned subsidiary to boost its presence in the auto-electronics market.

The new components include a reinvented digital cockpit platform for all vehicle segments that allows drivers to control in-car technology via voice, haptic feedback and physical knobs; the industry’s first 5G connectivity solution for vehicles; and an open and modular platform for autonomous driving designed to scale from Level 3 automation up to Levels 4 and 5.

“Together with Samsung, we have increased innovation speed through scale, resources and competencies to help automakers focus on the car’s evolution from device-centric to experience centric,” said Dinesh Paliwal, president and CEO of Harman. “Harman has the heritage and expertise in automotive, and collectively Harman and Samsung harness our best technologies and global scale to accelerate how we better serve the needs of automakers in this rapidly evolving automotive market.”

Samsung’s Kim told reporters that the company is considering resuming mergers and acquisitions that were active before its de facto commander-in-chief and Vice Chairman Lee Jae-yong was placed in police custody on bribery and corruption charges last February.

“We are reviewing acquiring a sizable number of companies but there’s nothing confirmed,” he said. “But we intend to keep up with what we were doing in the past.”

He went on to say that the company is even thinking about purchasing companies that are deemed crucial for the future of technology beyond 2020 - regardless of the price - but added that the industry is changing rapidly and Samsung’s consumer electronics and internet and mobile businesses are in a difficult situation.

“We are at a greatly crucial period,” he said. “A huge crisis may emerge if the company misjudges its direction.