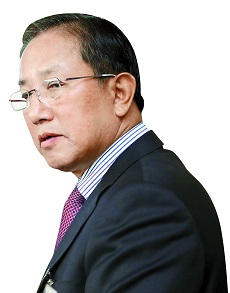 A former defense minister admitted that a secret military agreement was signed between Korea and the United Arab Emirates (UAE) during the Lee Myung-bak presidency to win a lucrative nuclear plant deal, the JoongAng Ilbo reported on Tuesday.

Kim Tae-young, who served as the Lee government’s defense minister from September 2009 to December 2010, had an exclusive interview with the JoongAng Ilbo on Sunday to respond to speculation that relations between Seoul and Abu Dhabi are in jeopardy over the secret military deal. Politicians and government officials have said the Moon Jae-in administration attempted to change the agreement, but faced strong protests from the UAE. Moon, therefore, sent Chief of Staff Im Jong-seok last month to calm the row, they said.

Kim admitted during the interview that there was a secret military pact, which includes a clause that guarantees the Korean military’s automatic intervention in an emergency in the UAE. It was the first time that a member of the Lee administration spoke about the deal made in 2009 to win the nuclear plant bid.

Kim said he visited the UAE three times during his tenure to conclude a memorandum of understanding (MOU) on Korea’s military cooperation with the UAE. The agreement was signed one month before Lee visited the UAE in December 2009 to seal the nuclear plant deal. At the time, the Korea Electric Power Corporation (Kepco) was awarded an $18.6 billion contract to build the UAE's first nuclear project.

According to Kim, the UAE almost decided to award the nuclear plant deal to France in 2009. Lee, however, entered a bid at the last minute and sought cooperation from the UAE leader Sheikh Mohammed bin Zayed bin Sultan Al Nahyan, the crown prince of Abu Dhabi, Kim said.

Kim said the Lee administration put all possible efforts into winning the project and the UAE asked what Korea could contribute to its security. “The UAE is a rich country with a large territory, but it has a population of only 6 million,” Kim said. “It was uneasy about its security, and therefore wanted to host foreign troops.”

According to Kim, the UAE made a specific request that Korean troops would be deployed in case of an emergency. In peacetime, the UAE wanted Korea’s help in training and in weapons management. The crown prince of Abu Dhabi, Sheikh Mohammed bin Zayed bin Sultan Al Nahyan, was also impressed with a demonstration by Korean special forces and requested their deployment, Kim said.

The Lee government concluded that a military deal would be beneficial to both countries, Kim said. “The UAE is a country in which a war had not taken place for a long time,” he said. “There was low risk. Even if a situation arose for deployment, we believed that our response could be flexible depending on the North Korea situation at the moment.

“It was also helpful for the Korean troops to conduct education and training at facilities created by the UAE,” Kim said. “Overseas deployment is not always about a military threat. I thought a deployment was possible when it helped both countries’ national interests. This is one of the reasons the United States deploys its troops overseas. But the National Assembly strongly opposed the idea, and persuading them was very difficult.”

A motion to deploy the Akh Unit, about 150 soldiers, including Special Forces and counterterrorism troops, was passed on Dec. 8, 2010, but opposition lawmakers boycotted the vote. The first deployment was made in January 2011.

Formally known as the UAE Military Training Cooperation Group Akh Unit, the team has had more than a dozen rotations. A 13th contingent was sent to the UAE on Nov. 10, 2017 for an eight-month mission.

Liberal politicians have pointed out that the MOU, if it guarantees automatic military intervention, amounts to a mutual defense treaty, which requires National Assembly ratification.

“The National Assembly shall have the right to consent to the conclusion and ratification of treaties pertaining to mutual assistance or mutual security,” Article 60 of the Constitution says.

Rep. Kim Jong-dae of the Justice Party argues that the Akh Unit is serving as a “tripwire,” guaranteeing Korea’s automatic intervention in an armed conflict in the Middle East.

Asked about the automatic intervention promise, Kim said, “Let’s think this way: we decided to become a brother of the UAE. We, therefore, promised to help the UAE when it is facing a crisis. But the National Assembly’s consent is still needed to deploy troops.”
Article 60 of the Constitution also gives the National Assembly the right to consent to declarations of war, the dispatch of armed forces to foreign states or the stationing of alien forces in Korean territory.

“I had serious consideration about the ratification issue,” Kim said. “The biggest concern at the time was that everything would fall apart after we took the matter to the National Assembly. So I proposed to sign an MOU that does not require ratification.
“I thought we could get it ratified later if an issue arises. It may seem like a problem now, but in 2009, it was the best choice for the national interest. We just kept it secret to maintain friendship and trust with the UAE,” Kim said.

Kim also dismissed a rumor that the United States was furious after finding out about the deal.
Kim said he did not know that Defense Minister Song Young-moo went to the UAE in November. Sources said the Moon administration, after finding out about the deal, tried to revise it or get it ratified to ensure its legitimacy. Song faced strong protests and Chief of Staff Im was sent in December to calm the row, sources have said.

“If Song had contacted me before his trip, I would have explained,” Kim said. “I guess the administration had a misunderstanding about the nature of the secret military pact,” Kim said.

“I guess the UAE’s royal regime was upset when [Song] asked to change the deal and the UAE threatened to cut all ties,” Kim said.
“Our relations with the UAE are important. The Blue House and the government are making efforts to calm the situation,” Kim said. “That was why I remained tightlipped until now because it is a matter of national interest, although I am from a different administration and political faction.”