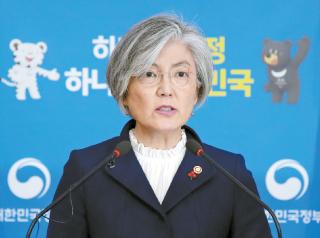 Foreign Minister Kang Kyung-wha announces the government’s position on the 2015 deal between Seoul and Tokyo on the “comfort women” issue on Jan. 9. [YONHAP]

After the Foreign Ministry task force announced the review report of the 2015 Korea-Japan agreement to settle Japan’s wartime sexual slavery of the Korean women, President Moon Jae-in said the deal is highly flawed in its procedure and contents. He also stressed that the deal is insufficient and doesn’t settle the issue. Because Moon was a lawyer and lawmaker, speculation was high that the government will scrap the deal and seek renegotiation. But Foreign Minister Kang Kyung-wha announced that Seoul will not seek renegotiation with Tokyo. That was a surprising decision.

The 2015 agreement does not do enough to restore the dignity and heal the wounds suffered by the victims. But the agreement still signaled progress, as the task force admitted, on particular issues that the Korean government had struggled to address during its negotiations with the Japanese government over the past 25 years. It included three key issues that hold Japan legally accountable going beyond just moral responsibility. The agreement included the Japanese military’s responsibility for sexual slavery, the prime minister’s apology and the Japanese government’s payment of state funds to compensate the victims.

The United States also played a role in arranging the deal in 2015. At the time, Japanese Prime Minister Shinzo Abe attempted to deny the existence of the comfort women and challenge the Kono Statement, which included Japan’s admission of forcible conscription of the women and apology. But he endorsed the agreement, which included his apology and introspection.

The Barack Obama administration played a key role. Then-U.S. Secretary of State Hillary Clinton dealt a direct blow at Japan that it is a sex slavery issue and criticized Japan’s failure to face the past. The U.S. Congress also adopted a resolution to condemn the Japanese military’s sexual slavery and pressured the Abe administration.

Moon declared a so-called two-track approach, announcing that he will address history as history based on truth and principle, while he will put efforts into restoring Korea-Japan diplomatic relations for future cooperation.

The importance of strategic cooperation between Korea and Japan is largely growing amid the escalating North Korean nuclear threats, China’s rise and the new alliance approach of the United States. Now, a path is open for the time being for a Korea-Japan summit and Abe’s visit to the PyeongChang Winter Olympic Games.

In 1996, Ryutaro Hashimoto, then the Japanese prime minister, tried to issue an official apology to then-President Kim Young-sam during their summit in Jeju Island and offered compensation to the victims through the Asia Peace Fund. But the effort to settle the comfort women issue was rejected by the Korean civic groups because Japan was trying to use a private fund, not participated by its government. In 1998, the Kim Dae-jung administration took 4.9 billion won ($4.6 million) from state funds to pay the victims the compensation that Japan had planned.

The compensation arrangement in the 2015 agreement was once again rejected by the civic groups. Instead of the Japanese government’s 1 billion yen ($9 million) fund, the Korean government decided to pay the money to the victims on its own. Ironically, two attempts to settle the issue failed in similar ways.

What should be the resolution be now? The government said the 2015 agreement cannot resolve the issue. It said it expects a voluntary and sincere apology from the Japanese government.

No one thinks that the Abe administration will offer a voluntary, sincere apology. In fact, the Japanese government said it will not budge 1 millimeter from the agreement, urging Korea to respect it.

The history issue cannot be resolved by Korea’s position. When Korea approaches the issue with an objective attitude, the international community will show its support.

In 2015, 36 out of 47 survivors at the time made the decision to accept the agreement. When all survivors pass away, we will regret that we failed to resolve the issue in time.

*The author, former chancellor of the Korea National Diplomatic Academy, is a chair professor at Hankuk University of Foreign Studies.