Trainer loves her dogs, even the ones that fail

Trainer loves her dogs, even the ones that fail 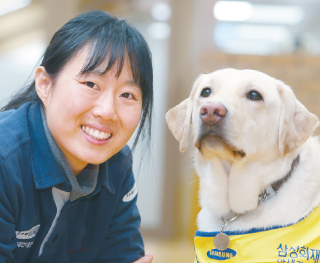 Hong Ah-reum, trainer at the guide dog training school, My Dog and Samsung, specializes in positive reinforcement. [MARINE INSURANCE MY DOG AND SAMSUNG]

A golden Labrador retriever was running on the grass at My Dog and Samsung, a school for guide dogs run by Samsung Fire and Marine Insurance in Yongin, Gyeonggi, on Dec. 26.

“Labrador retrievers are a smart and gentle breed that generally likes people very much,” said Hong. “They’re also strong enough to pull back a visually impaired person from walking into danger. That’s why 90 percent of all guide dogs around the world are Labradors.”

Hong was born in 1982, the year of the dog. She is the only female among the six trainers at My Dog and Samsung. Labradors are large dogs with a lot of strength, and their trainers have to be strong too. Female dog trainers are rare in Korea.

When Hong joined in 2002, she was in charge of managing the dog houses and breeding. But she soon became popular among the dogs and they started following her around. Hong started training in 2011.

Guide dogs are carefully bred. When the puppies are five months old, they are registered as guide dogs for disabled people. At 7 months old, they go for “puppy walking,” which is a process in which a puppy is sent to a volunteer’s home to receive basic obedience training. After a year, they enter the guide dog school for more advanced training.

Hong currently has six dogs under her wing. They each receive different training and Hong gives an intensive 30-minute class for each one daily. Hong’s special technique is positive reinforcement.

“Dogs showing aggressive behavior like barking or trying to bite is a sign that they’re not happy with something,” Hong said. “It’s better to ignore bad behavior and compliment the good behavior. Then dogs will understand which actions make their owner happy.”

Not all dogs that go through the training become guide dogs. The success rate is only 30 percent. Among 62 dogs that Hong taught so far, only 20 became guide dogs. Trainees who fail are adopted by ordinary households. Those who do serve as guide dogs for around 10 years, then retire. The average life span of large dogs like Labradors is 13 years.

Seeing a dog she trained fail the test doesn’t make Hong sad. “Guide dogs have to truly enjoy their jobs, not only for themselves but also for the safety of the visually impaired owner,” she explained.

“Some people think guide dogs doing their jobs is a form of sacrifice for human beings but from the dog’s perspective, it’s the same as going on a walk with their owner.”