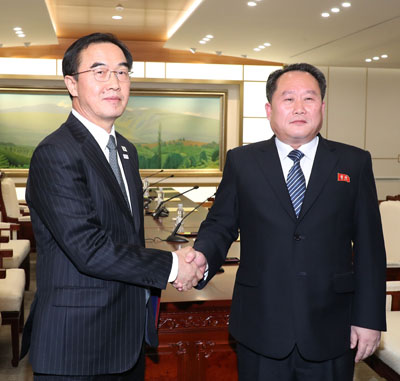 President Donald Trump’s support for the resumption of North-South dialogue on Jan. 9 was the right move. The outcome of the talks at Panmunjom will help to stabilize the peninsula through the PyeongChang Winter Olympics. But the emergence of North-South dialogue just as the pressure campaign on North Korea was reaching its apex clearly presented Washington with a dilemma. This was evident in the way the president’s tweets evolved: first skeptical of dialogue, then stating “we’ll see” — and finally expressing the hope that the dialogue moves even beyond the topic of the Olympics.

Why the dilemma? First, Pyongyang likely aimed to blunt and dissipate the mounting pressure from the international community. Trump was probably right to claim that Kim Jong-un’s proposal for dialogue was due to expanded U.S. economic sanctions. Hundreds of rickety wooden North Korean fishing boats are showing up around Japan as fishermen and Korean Peoples Army soldiers search farther into the ocean for food. The North Korean ship that recently washed up on the Japanese coast with dead crewmen on board gave evidence of the desperate state of North Koreans right now. The weak health condition of the North Korean border guard who defected late last year further demonstrated that even elite units are malnourished. The North’s statement going into the Jan. 9 Panmunjom talks was revealing, claiming that the United States faced a choice between “destruction” and “peaceful coexistence” — meaning acceptance of North Korea as a nuclear weapons state.

Second, the North was probably aiming to drive a wedge between Seoul and Washington. While support for the U.S.-South Korea alliance remains strong, and the Combined Forces Command has probably never been more unified, the Blue House and White House have both sent signals that suggest some disconnects at the political level. Trump’s attacks on the U.S. Korea Free Trade Agreement (Korus) and promise of “fire and fury” against North Korea have raised the anxiety level in the Blue House. The Moon administration’s “three no’s” understanding with China (no more Thaad deployments, no participation in U.S. regional missile defense, no U.S.-Korea-Japan alliance) created deep consternation in Washington. Trump probably will not withdraw from Korus and Seoul probably did not make the explicit commitments to China on the “three no’s” that Beijing claims, but those episodes could tempt any adversary thinking they might succeed in a wedge strategy. If Trump had opposed North-South dialogue, the rift would have become serious.

Third, the price of North-South dialogue was a delay in regularly scheduled U.S.-Korea defense exercises. These exercises are more important than ever to demonstrate solidarity in the face of the North’s provocations and to ensure that the United States and South Korean forces are ready to “fight tonight” in a crisis. The postponement of not having exercises until after the Olympics also could create a condition where pressure mounts not to resume exercises, lest the military moves jeopardize inter-Korean dialogue. There is no doubt at all that this will be China’s position in the spring — but Beijing has an interest in seeing U.S. alliances recede.

Fourth, the optics of North Korean participation in the Olympic ceremonies is distasteful to many Koreans and Americans who know that even as the Games “celebrate” North Korean athletes and cheerleaders, many tens of thousands of North Koreans are suffering in Yodok camps and Pyongyang is accelerating the most threatening nuclear weapons program in the history of East Asia.

And yet, the United States had no choice but to support the Moon government and welcome the Jan. 9 agreement that North Korea will participate in the Games. Ultimately, it was not tenable for any U.S. administration to appear as a barrier between the two Koreas, or to do anything other than follow Seoul’s lead, particularly since Pyongyang would have used that to dismiss the South as a “puppet regime” and drive a real wedge in the alliance.

Moreover, the United States has a clear interest in ensuring the peaceful and successful completion of the Games. As painful as the optics may be in light of Pyongyang’s human rights violations and threatening behavior, it is better to have North Korea in the Games than threatening to destabilize them from without — or do even worse, as the North did with terrorist attacks before the 1988 Seoul Games.

And finally, even in the midst of a major pressure campaign on the North, it is in the United States’s interest to allow space for some kind of dialogue with the North. Complete and total isolation is never safe, even when it is necessary to impose unprecedented costs for a state’s dangerous behavior.

*The author is senior vice president for Asia and Japan chair at the Center for Strategic and International Studies and associate professor at Georgetown University in Washington, DC.