North Korea’s 140-strong troupe may cross over at DMZ

North Korea’s 140-strong troupe may cross over at DMZ

The Samjiyon Band performs at the People’s Palace of Culture in Pyongyang on Feb. 19, 2015, to mark the Lunar New Year, as reported by state-controlled media at the time. Whether this band is the Samjiyon Orchestra North Korea wants to send to South Korea for the Winter Olympics is not yet known. [YONHAP]

Pyongyang asked Seoul last Monday to allow 140 members of an orchestra to cross into the country to attend the Winter Olympics through the heavily fortified truce village of Panmunjom next month.

If the troupe does travel to the South via Panmunjom - where both countries exchanged gunfire just last month after a North Korean soldier defected - it would be a symbolic gesture of amity in the world’s last country divided by the Cold War, and one with few precedents.

Lee Woo-sung, deputy minister of the Culture and Arts Policy Office at South Korea’s Ministry of Culture, Sports and Tourism, who led a four-member delegation to inter-Korean talks Monday, described Pyongyang’s request to local reporters late Monday night in a press briefing at the Government Complex in central Seoul.

The South neither accepted nor rejected the proposal, said Lee, but promised to faithfully provide accommodations for the delegation. A final decision on the matter was forthcoming, he said. 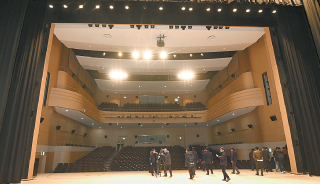 The Gangneung Arts Center will likely be one of the two venues where the Samjiyon Orchestra performs. [YONHAP]

Ever since the two countries opened new roads along their east and west coasts penetrating the border in the early 2000s, when inter-Korean cooperation was robust, civilians rarely crossed through the truce village, except when government representatives tried to reach the other side to attend an official South-North meeting.

Local pundits surmised that Pyongyang’s request might be part of a new “peace offensive.”

“North Korea is trying to promote its participation in the Olympics, a symbol of hope, by crossing the border through Panmunjom, a symbol of division,” said Ahn Chan-il, a North Korean defector who now serves as president of the World Institute for North Korea Studies in Seoul.

Chon Hyun-joon, a visiting professor at the Department of Military Security at Woosuk University, said the regime’s message is that it is a “peace-seeking nuclear state.”

Pyongyang could think that the gambit might help improve ties with the United States as well, said a South Korean government official.

According to Lee, the South’s chief delegate in the discussions with North Korea on Monday, 140 members of something called the Samjiyon Orchestra, including singers, dancers, instrumentalists and staff, will travel to Seoul and Gangneung, one of three venues in Gangwon where the Winter Games will be held, next month to perform once in each city.

The precise date of their visit or whether the performances will be open to the public haven’t been decided yet, said Lee. More specific details will be hammered out after a group of North Korean inspectors visit the South to check accommodations.

If the orchestra does come, it will be the first time since August 2002 that North Korean artistes will take to the stage in the South. A delegation of 140 would also be the largest performing arts team to come here, and the first to play outside of Seoul if it performs in Gangneung. Local media speculated that it might perform at the Gangneung Arts Center, and possibly the Seoul Arts Center in Seocho District, southern Seoul, or the Sejong Center for the Performing Arts in Jongno District, central Seoul.

Lee said he and his delegates suggested to the North that the troupe could travel between Seoul and Gangneung by KTX bullet train.

The name “Samjiyon Orchestra” has never appeared in North Korean media, and analysts believe Pyongyang might have formed a makeshift group for the special visit, as in 2002, when it hired students from a music school in Pyongyang to perform in Seoul.

Lee said the North did not give any explanation of the Samjiyon Orchestra during the meeting, neither did it explain whether the famous Moranbong Band, an all-female group known to be a favorite of North Korean leader Kim Jong-un, will be part of the delegation.

A working-level meeting will be held today at 10 a.m. at the Peace House, a South Korea-controlled building in Panmunjom, to further discuss North Korea’s participation in the Winter Olympics.

Vice Unification Minister Chun Hae-sung will lead a three-member delegation for the dialogue, which will be attended by Jon Jong-su, who is vice chairman of the Committee for the Peaceful Reunification of the Country of the DPRK.

Meanwhile, Seoul established a makeshift group of 20 people Tuesday who will assist the incoming North Korean delegation next month.

Some 400 to 500 North Koreans are expected to arrive for the Olympics, including athletes, cheerleaders, journalists, government officials and taekwondo demonstrators.