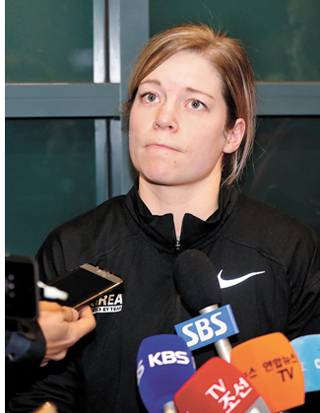 Murray made the remarks after returning from the team’s U.S. training camp in the wake of the South Korean government’s proposal to form a single Korean team at the Olympics.

Both Sports Minister Do Jong-hwan and Prime Minister Lee Nak-yon have said adding a few North Korean players to South Korea’s current 23-player roster would not affect homegrown athletes because hockey is played in short shifts, and players all get turns taking the ice.

But the Olympic roster is set at 22, so some players, whether South or North Korean, will likely have to sit out as healthy scratches.

“I think there is damage to our players,” Murray told reporters at Incheon International Airport. “It’s hard because the players have earned their spots and they think they deserve to go to the Olympics. Then you have people being added later. It definitely affects our players.”

South Korea made the joint team proposal at high-level inter-Korean talks last Tuesday, during which North Korea offered to send an athletic delegation to the Olympics.

The proposal for a joint team wasn’t made public until Friday, but Murray, daughter of former National Hockey League head coach Andy Murray, said she was not directly informed of the changes by the Sports Ministry nor other government sources. Instead, she claims she only found out about it on Sunday through her national team staff along with other reporters at NBC in the U.S. and CBC in Canada.

Murray said she was “shocked” to hear the joint team being mentioned again this close to the Games.

Seoul’s push for the joint team has met with some public backlash that understands South Korean players may be robbed of a chance to play in what could well be their first and last Olympics. South Korea, ranked 22nd, is making its Olympic debut as a host nation, and despite recent progress, is not yet good enough to qualify for Olympics on merit.

Do first spoke of the possibility of a single Korean hockey team last June. Murray said she and her coaches actually started watching some videos of North Korean games, just in case she’d be asked to coach additional North Korean players.

But it doesn’t seem like North Korea has enough talent to make a difference for the team.

“We could potentially add some players,” said Murray, “but they wouldn’t be first- or second-line players for our team.”

The two Koreas faced each other last April during the International Ice Hockey Federation Women’s World Championship Division II Group A tournament in Gangneung, the Olympic sub-host city for all hockey games. South Korea shut out North Korea 3-0, though the game was more lopsided than the score indicates. South Korea, which went on to win that tournament with an undefeated 5-0 record, is at No. 22 in the world and on the rise, while North Korea, at No. 25, is a team on the downslope.

The coach did, however, have some praises for the North Korean team.

“They do have some players that play with a lot of heart,” she observed. “They’re hard-nosed and they work really hard.”

Asked to name some North Koreans who had made an impression on her, the coach recalled Won Chol-sun, who consistently logged heavy minutes and played in all situations.

“When we played against them, she was blocking shots with her face,” Murray said. “She’s very intense.”

Murray’s team, as it’s structured, also has some promising young players. Captain Park Jong-ah, 21, is the best forward, a highly talented winger who can score from anywhere, while 16-year-old forward Kim Hee-won is a rising star. On defense, Eom Su-yeon, also 16, is a mobile, puck-moving rearguard who plays the point on power plays and kills penalties.

South Korean officials have said they’re seeking to keep the South Korean roster of 23 and add 12 extra North Korean players to have a total of 35 members. They are currently seeking cooperation from the International Olympic Committee (IOC) and the International Ice Hockey Federation (IIHF), which according to these officials are also seeking understanding from other participating nations because a roster expansion granted to only one team would create an uneven playing field.

Murray said she felt other countries may understand the situation and see it as a “political statement.”

“They [may] understand that North and South Korea coming together through sports is a great story,” she said. “I just wish it would have happened earlier.”

If the unified team is put together, the coach said her biggest concern would be “team chemistry.”

“Adding somebody so close to the Olympics is a little bit dangerous just for team chemistry because the girls have been together for so long,” she said. “I’d have about a month to teach these [new] players the way our team plays. That makes me a little nervous.”