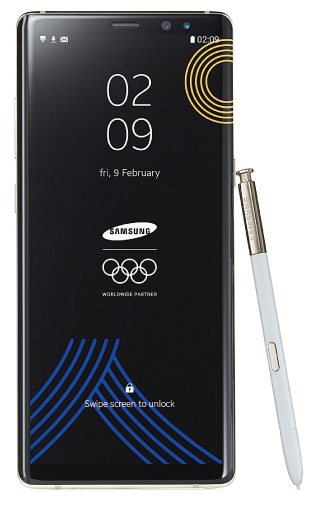 With a little over three weeks left before the Winter Games in Korea, Samsung Electronics unveiled the PyeongChang 2018 Olympic Games Limited Edition Galaxy Note8 on Wednesday.

Over 4,000 of the devices will be given away to participating athletes, their families and the members of the International Olympic Committee as well as the game’s organizing committee.

The back of the special edition device will be made from shiny white glass to tie-in with the winter theme and will feature the Olympic rings in gold. Celebratory PyeongChang 2018 themed wallpapers will be pre-loaded onto the phablet and several apps will be pre-installed to help maximize the Olympic Games experience.

The No. 1 smartphone producer is a “worldwide Olympic partner in the wireless communications equipment and computing equipment category.”

“Throughout our 20-year legacy as an Olympic partner, Samsung has showcased our support of the Olympic movement by helping spread the Olympic spirit and enhancing connections through our latest technological innovations and immersive experiences,” said Lee Young-hee, executive vice president of Samsung. “We’re proud to provide the PyeongChang 2018 Olympic Games Limited Edition to all athletes in an effort to help them stay connected, capture and share one of the most memorable moments of their lives.”

Samsung first got involved in Olympic Games sponsorship at the 1988 Olympic Games in Seoul. Beginning with the Winter Games in Nagano in 1998, the tech giant extended its commitment to the international games as a partner in the wireless communications equipment category, providing its proprietary wireless communications platform and mobile devices.

During the 2014 Sochi Winter Olympics, Samsung distributed 3,000 Galaxy Note3s to all attending athletes. At the 2016 Rio Summer Games Samsung upped the ante, providing 12,000 Galaxy S7 Edges to participants. There are usually fewer athletes at the Winter Olympics.

Samsung has been partaking in the Winter Olympics torch relay campaign since November. It picked 1,500 runners - one fifth of all torchbearers - through a public recruiting process it held last April under the slogan “Do what you can’t.”

The so-called SmartSuit, tailor-made for the two athletes, features five integrated sensors that can transmit data down to the millimeter, such as the distance from their hips to the ice, through a wireless connection to the national coach’s Galaxy S8 smartphone.