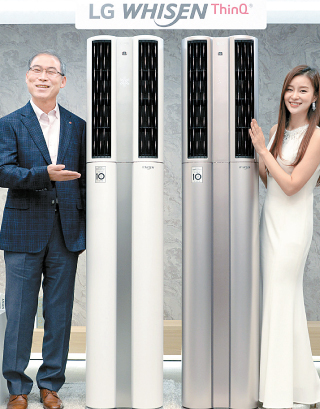 It is the first time the electronics giant used its own AI platform - dubbed “DeepThinQ” - on air conditioners.

DeepThinQ is able to learn about owners’ general living environment including temperature, humidity and air conditioner usage patterns and customize its features to individual homes, according to LG.

DeepThinQ also enables users to control home appliances via voice command if they are within 3 meters (10 feet) of the appliance. As the AI platform was built based on deep learning technology, the more users engage in conversation with the AI the better it can understand their queries.

After calling a phrase to wake the unit up - “LG Whisen” - users can turn it on and off and also control the power and direction of the cool air, according to LG.

The unit will also understands users’ comments like, “It’s hot” and will ask in reply, “Should I turn down the temperature?”

LG’s appliances also respond to various AI speakers already on the market. According to LG, it has expanded its partnerships with various tech giants so its new appliances can be controlled also by other speaker-type AI assistants from Google, Amazon, Naver, SK Telecom and KT.

The launch came after the Korean electronics giant vowed to use DeepThinQ on all new home appliances introduced this year at the Consumer Electronics Show held last week in Las Vegas.