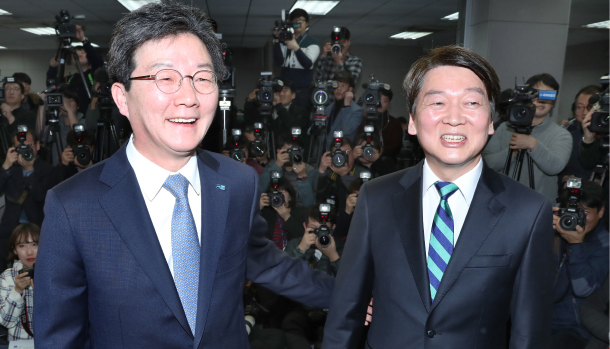 The opposition People’s Party leader Ahn Cheol-soo and Bareun Party leader Yoo Seong-min announced together their decision to merge the two parties at a meeting in the National Assembly on Thursday.

“It is our duty as leaders of the two parties to inform our supporters of our intention to merge the parties and to let the people know what kind of politics we will pursue through the merged and reformed party,” Yoo said. “We understand that there are difficulties down the road in merging the parties, but Ahn and I will do all we can for a successful merger.”

“Those who oppose the merger do so because they are not sure what kind of identity and vision the merged party will have,” Ahn said. “But we have held at least 14 meetings with the party members and citizens in general comparing the two parties’ policies and vision, and we’ve found that the differences are not large.”

Ahn has been striving to bring together the two parties, sometimes dubbed “rational liberals” and “reform-minded conservatives,” to counterbalance the two major political forces of the ruling Democratic Party and the main opposition Liberty Korea Party, which together hold nearly 240 seats in the 299-member parliament.

People’s Party members opposing the merger submitted on Wednesday an injunction against Ahn’s call to host an all-party vote on whether to merge with the Bareun Party. The vote is scheduled for Feb. 4, the date of the party convention of the People’s Party.

“The announcement this morning was nothing more than a quickly put-together response to the mounting public criticisms against the merger deal, which is a form of collusion with the conservatives,” said People’s Party Rep. Choi Gyung-hwan. “The opposition within each party against a merger will only grow stronger from this day on. The merger will be a downfall to Korean multi-party politics.”

“I don’t care if the two leaders announce a merger, or a marriage for that matter,” said Rep. Park Jie-won, former head of the People’s Party, in an interview with TBS radio on Thursday.

“There are many of us within the People’s Party who will go a separate way to create a new and reformed party. We will host a meeting on Jan. 28 to launch a committee on establishing a new party, shut down the Feb. 4 party convention and host our own convention to establish a new party.”

The two parties’ leaders emphasized that the merger will strengthen multi-party politics in Korea.

“The newly merged party will be writing a new history in Korean politics, because it will seek to be free from heavily region-based politics, like Yeongnam [Daegu, Gyeongsang Province] or Honam [Gwangju and Jeolla provinces] forces,” Yoo said. “The reformed and merged party will show in its action its departure from such region-based politics, and this I am sure will help the party win more public support.”

The regional rivalry between Yeongnam and Honam has defined Korean politics for decades.

Rep. Park In-sook also defected from the Bareun Party Tuesday and returned to her former party, the LKP, bringing down the number of Bareun Party lawmakers to nine.

Ahn and Yoo emphasized that the future of the merged party is in the hands of the people, not party members.

“The merger’s success will depend on the people and their support for the merged party,” Ahn said.

“A reform-minded conservative party and a rational moderate party are coming together in the merger,” Yoo said. “And what is most important in the merger’s success is the support of the people, which will determine how many seats the party is able to earn at the National Assembly in the next election.”